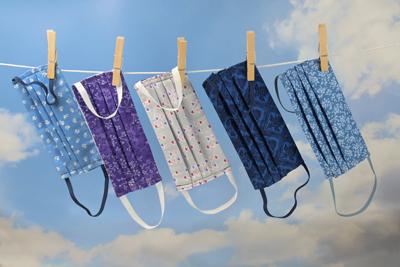 A controversial mask mandate that has been openly defied by some restaurants and businesses and led to a lawsuit against the governor will be extended through the end of August. It will also include a requirement for students from second grade through college to wear masks while attending school.

The mask mandate first went into effect 5 p.m. July 16 and required most people over the age of 6 to wear a facial covering over their nose and mouth if within 6 feet of a person from a different household. There were several exceptions to the rule, including for those visiting a restaurant and for anyone with a medical condition or disability that prevents wearing a facial covering.

While many complained about the mask mandate, others praised Gov. Kay Ivey. In a media conference announcing the mandate extension Wednesday, Ivey said there's "no way you're ever going to make everyone happy 100% of the time."

Still, that amendment to her safer-at-home order seemed to be on its way to the desired effect — fewer new cases of COVID-19 being added to the cumulative total, and an overall reduction of the spread of COVID-19 in Alabama communities.

She said the right thing is not necessarily the most popular thing, and that she and her administration "have made our share of mistakes during this pandemic, but our goal has always been to make more good decisions than bad, hopefully leading to more positive results along the way."

The original mask requirement was due to expire Friday. Now, it will continue until at least 5 p.m. Aug. 31.

This means students will have to wear masks "whenever practical" if they return to class in the coming weeks. Ivey noted in her conference that it will only be required of students in second grade through college, similar to the age limit of the safer-at-home order.

"This can be an added burden to require that a mask be worn, but just as we are focused with creating a safe and healthy environment for our students, it's also important that we take care of our teachers as well," Ivey said, describing teachers as one of the most important roles in a child's life.

She said she respects that many school systems have decided to begin the 2020-2021 school year virtually, but she encouraged all school systems to work toward getting students back to the classrooms.

"If the COVID-19 situation in your community or county permits, you should be looking to phase back into in-person classroom participation, if at all possible," Ivey said.

She voiced concern that not having students in class would lead to a "dramatic, negative impact on Alabama's future, our young people."

"I want to encourage every superintendent, every principal, every teacher and every parent who's listening," she said. "We don't have the luxury of not getting our young people back in school. ... We need to do everything we can to get our kids back in the classroom as soon as possible."

Also during the media conference, state health officer Dr. Scott Harris reported hospitals have begun setting and breaking numerous records for all-time highs of COVID-19 patients. Statewide, there have been more than 81,000 confirmed cases of the disease since March, with Harris noting about 22,000 of those cases were confirmed in the last two weeks.

As of Wednesday, 1,489 deaths had been reported and confirmed by the Alabama Department of Public Health as the result of COVID-19. Another 49 are reported as "probable" deaths from the novel coronavirus.

"These numbers are as high as we've ever seen," Harris said, noting the rise in cases is consistent with what they saw after Memorial Day and attributing it to Fourth of July celebrations.

He admitted that his own advice in curbing the spread of the novel coronavirus resulted in mixed messages, but he said he was "trying to give the best evidence at the time" and believes the statewide mask mandate is the best advice for Alabama today.

"I know people don't like being told what to do, and I don't either, but I do think it's the right thing to do," Harris said. "... Today, there is no argument whether these (facial coverings) are effective."

He predicted there are several months left to go in the pandemic, and "it's going to be more important than ever that people be willing to wear face coverings" as the school year begins, especially if Alabamians want to minimize the number of outbreaks and school closures.