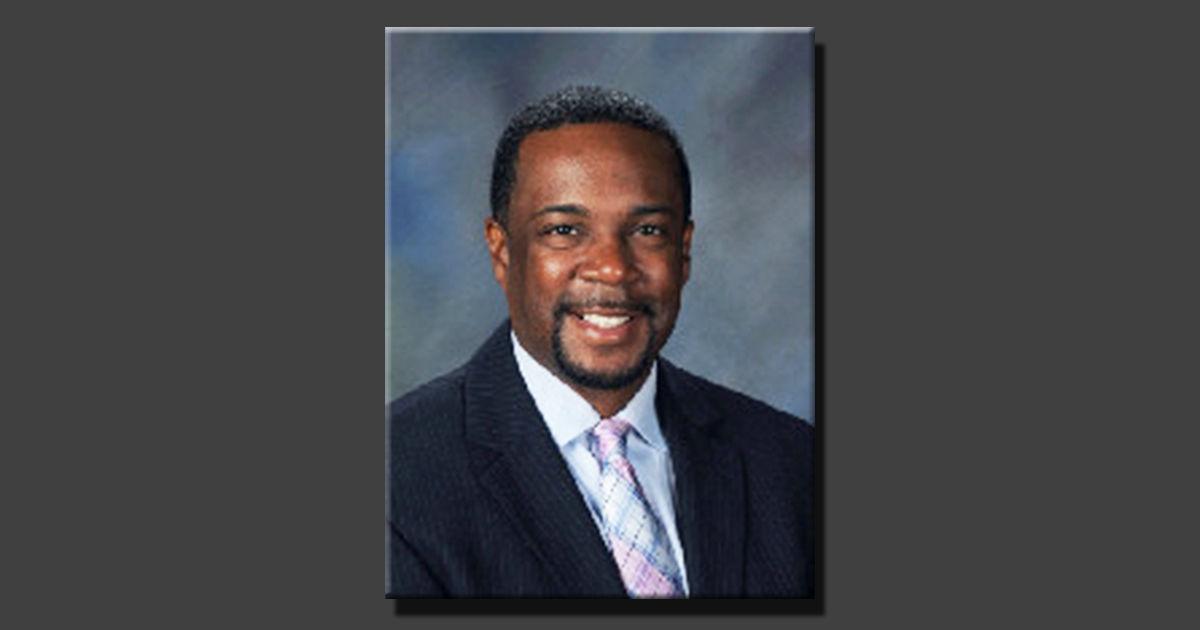 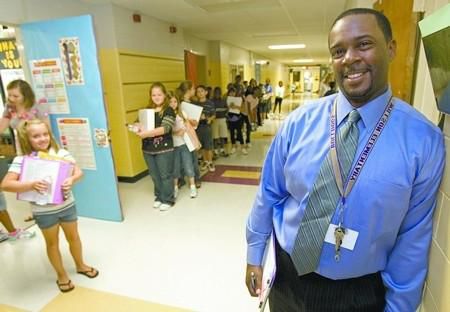 Carlos Nelson stands for a photo on his first day as principal of L.E. Willson Elementary School in 2009. Eleven years later, he has moved up to the ranks to deputy superintendent of Sheffield City Schools and is ready to serve as the superintendent of Limestone County Schools.

Last weekend, during a basketball game between Sheffield and Tanner, Carlos Nelson said he noticed something powerful. Even though Tanner was part of a different community on the other side of the county, there were students in red and white Elkmont gear among the fans in green.

It's part of why he applied to be LCS' next superintendent. He admitted he was also impressed by how many people turned up for his interview Monday night.

"It's a cold, damp, wet night. The roads are flooding," he said. "You have a delay (Tuesday), but you're here, and it shows you care about Limestone County Schools."

He told members of the Limestone County Board of Education he's been blessed to work with great people during his time in Sheffield City Schools, and he hopes to bring those experiences with him to Limestone County. Nelson described some of his experiences during the interview, including his work to bring iPads to classrooms and earning his commercial driver's license so he could personally make sure students had a ride to and from field trips.

"That was an opportunity to make sure they didn't miss out on opportunities," he said of getting his CDL.

Since joining SCS as deputy superintendent, Nelson said the district has also expanded to include other opportunities — for students and for teachers. When there weren't enough spots at the tech school in a neighboring district, SCS began hosting its own. And when the district realized many of its veteran teachers only had a bachelor's degree, Nelson said they partnered with the University of North Alabama to give faculty a chance at more.

Despite his position as an outsider, Nelson said he's a believer in promoting within a district, but not just because someone has put in more years than another candidate.

"I believe in hiring the best person," he said. "In order to do that, if I want to promote within, I need to make sure that we have well-trained people inside of our school district, from our school personnel to our teachers to our administrators, to move up in Limestone County Schools."

One also has to have open communication and honest feedback to make that work, he said.

"I think if you're doing your job well, great, but if there's a need to provide constructive criticism, then I need to provide that," Nelson told board members. "The worst thing we can do is to let something go on that could be improved, because our kids deserve better."

That opportunity for feedback goes both ways, too. Like other candidates for superintendent, Nelson stressed the importance of hearing from students, parents and anyone else in the district when it comes to the school system.

"I'm always going to listen," he said. "I can't say you'll agree with the action I take, but I'll always listen to you and make decisions in the best interests of Limestone County Schools. It's not about us. It's about the students that walk through our doors every day. It's about our community. If we're divided, we can't move Limestone County forward."

"Any time I have a bad day, if I'm frustrated, I can go to Chick-fil-A and get great service," he said, noting the consistency in service. "... That should be the same way at any Limestone County School. Any school you go to, the parent should know their child is going to get a quality education, they're going to be welcome and they're going to be safe."

He said he doesn't believe in favoritism among schools, saying a student's ZIP code or address should not be a determining factor in the success they have. In Limestone County, he said he would avoid that by making sure the district maintained good communication and really looked at the data.

"One of the things I believe is important is understanding the difference between proficiency and growth," Nelson said. "... We can all show some kind of growth, but the key is when we start looking at proficiency. That's where your socioeconomics, your outside obstacles come into that. Trying to close the gap between growth and proficiency is where we need to work in Limestone County Schools."

In Sheffield, he said the district managed that in part by working to make sure students had a safe, quality building during the day, they had access to support or resources outside school and the district got involved early. He said his biggest professional disappointment was watching students who performed well walk away from opportunity because something in the community or at home got in the way, and he often questioned what more he could do to help.

Board member Earl Glaze questioned how Nelson would work with local news media as superintendent. Nelson's answer was simple: "We have to tell our story."

Nelson told board members having a great relationship with local news media is important, because "if we don't tell our story, somebody else will."

"We need to celebrate," he said. "We need to brag on ourselves. Limestone County Schools, y'all are doing a lot of great things, and we need to make sure you are telling your story."

He promoted taking the time to recognize staff, faculty and parents at meetings for their accomplishments. He said it was also important to make sure social media and websites were used effectively, especially with the growth coming to the area.

He said when good things happen in his current district, it's not uncommon for someone at the central office or a school to call the local news media and let them know, because "they're always looking for a positive story."

Nelson was the fourth of five candidates to interview for the Limestone County Schools superintendent position. Alan Miller, head of the department of Counselor, Leadership and Special Education at Auburn University at Montgomery, was interviewed Tuesday and will be covered in the weekend edition of The News Courier.

Board members will next meet 6 p.m. Tuesday, Feb. 18. Visit https://bit.ly/LCBOEmembers for links to contact any of the seven board members who represent Limestone County and provide feedback on a candidate.