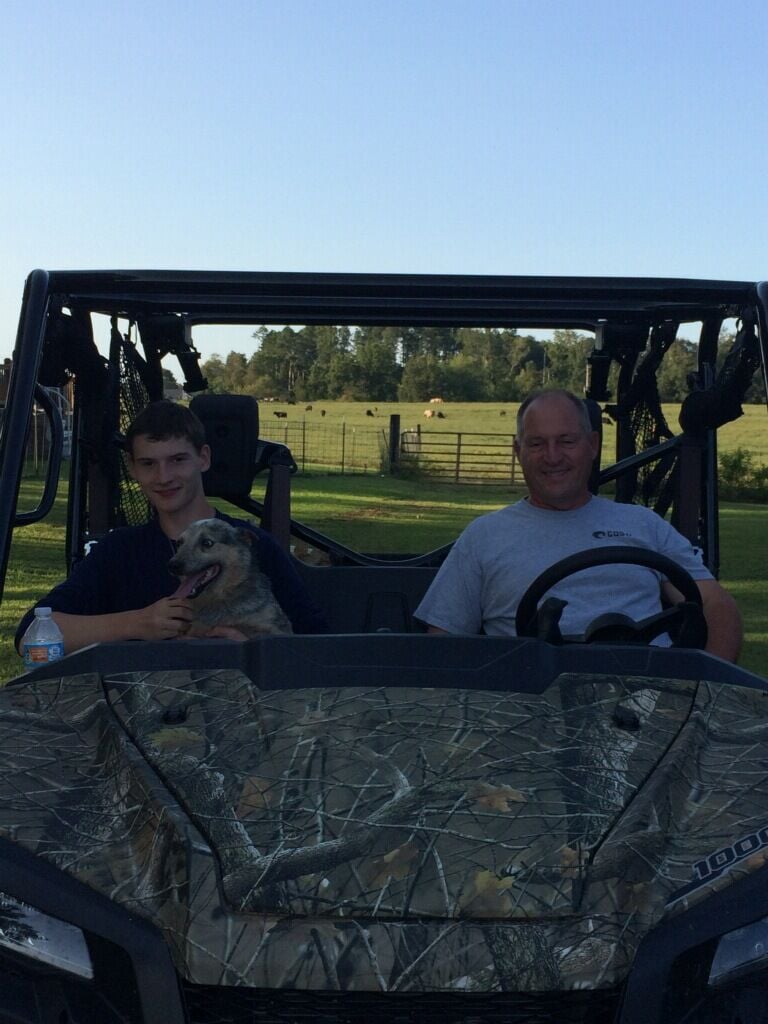 Athens Police Chief Floyd Johnson sits with his son, Caleb, while on the family farm. A lot of residents know Johnson as the city's police chief, but most may not know he is also a cattle farmer. He said he has been working around cattle since he was in diapers and learned the trade from his grandfather. 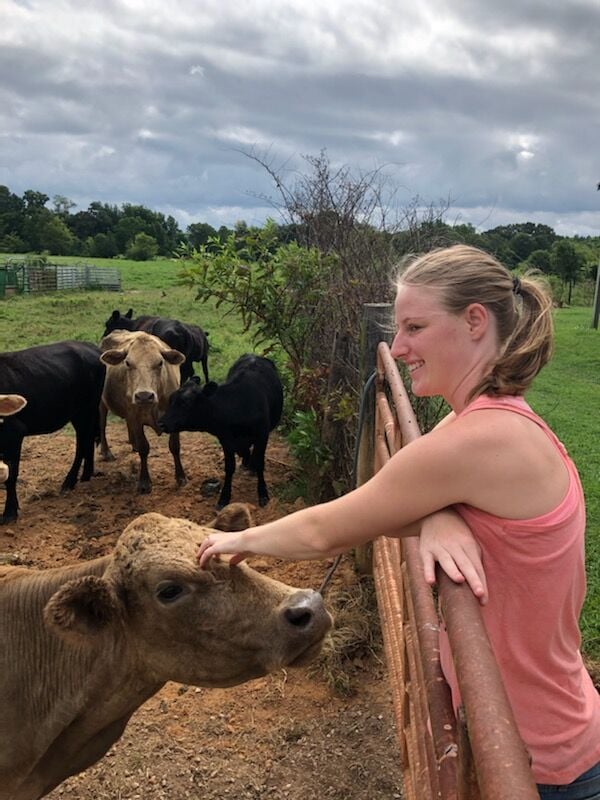 Callie Johnson scratches the head of a member of the farm's herd. While cattle are large and powerful animals, they are generally docile and relatively safe to handle for those who know how.

Athens Police Chief Floyd Johnson sits with his son, Caleb, while on the family farm. A lot of residents know Johnson as the city's police chief, but most may not know he is also a cattle farmer. He said he has been working around cattle since he was in diapers and learned the trade from his grandfather.

Callie Johnson scratches the head of a member of the farm's herd. While cattle are large and powerful animals, they are generally docile and relatively safe to handle for those who know how.

Athens Police Chief Floyd Johnson has met many people in and around the city during his tenure. He often finds himself talking with members of the community, and he has even set aside time for phone calls from citizens in the past since his time in the field decreased during the COVID-19 pandemic.

However, there are probably a good number who are unaware what the APD chief does while not working to keep the city safe.

Johnson is a fourth-generation farmer. He raises about 75 head of cattle on 175 acres in Limestone County.

“We run a family farm,” Johnson said. “I have been working on the farm with cattle in one way or another since I was in diapers, I reckon. My granddad used to take me everywhere with him.”

Johnson said he remembers visiting sale barns in Athens, Decatur and Huntsville with his grandfather. However, when he was 14, Johnson said he swore off the cattle business, possibly in part due to a bad experience he had while helping out.

“I was about to go back to Montgomery, where I lived then, for the opening of football season, and I was helping my grandaddy get some cattle up,” Johnson said. “He told me to not let this 650-pound heifer get out, and she ran me over. I didn't have sense enough to get out of the way, so when I was about halfway up, she came back, because she had nowhere else to go, and ran me over a second time.”

Johnson said he was so banged up from the experience, his football coach asked what had happened to the teenager, but “they didn't believe a cow ran over me.”

Johnson said his wife and children help him tend the farm, which he says is a lot of fun and a blessing.

“The kids have learned a lot about life while helping deal with horses and cattle,” he said. “They have felt the thrill of a new calf being born and bottle-feeding it to their favorite cow dying. It's neat to have them do something like this.”

Even though he swore off raising cattle and stayed away for a long time, Johnson said his grandfather eventually pulled him back into the business.

“My granddaddy told me he was getting out of the cow business, saying he just couldn't keep them up,” Johnson said. “I told him I would feed them every day if he would take care of them, and that's how I got hooked back in. He died in 1997, and there's not a day I don't think about him when I go around those cows.”

Johnson said his kids may or may not stay in the farming business themselves, which is up to them. If they do, they will represent the fifth generation of the family working the farm.

Johnson said they would be carrying on a family tradition that can be traced back to at least 1905.

“My granddaddy's mother bought a little land that is still part of the farm,” he said. “We have the paper where the governor of Alabama signed where she could own land, because back then females couldn't. It's neat to carry on the tradition and pass it along.”

Johnson said there are a lot of “good folks” farming in the area now, but he said a lot of people he grew up watching and respected are “gone now.”

“I enjoyed getting to learn from them, and hopefully what we do can run off on the next generation,” he said.

Being police chief of a city the size of Athens is a full-time job. Johnson began his career in law enforcement in 1982 and has worked in every related position he can think of.

He became police chief in 2012, following in the footsteps of former chief Wayne Harper, who is now a member of the Athens City Council.

Johnson said sometimes it's hard to juggle both those responsibilities and working cattle on the farm. He said the size of his herd has dropped over the years as a result. At one time, he had closer to 145 head of cattle, he said.

“You do a whole lot of fence work while on the phone with folks,” Johnson said of juggling both professions. “We had a tornado come through that tore out a bunch of fences, and my daughter and I were trying to fix them while I was running everything on the police side. We were doing everything we could just to hold on. Sometimes it's hard, sometimes it's not so hard.”

However, Johnson said there are advantages to working with cattle on the side. He said it provides a lot of relaxation.

“No matter how many upset people I've dealt with or if I've had a bad day, I can take a feed sack out, and suddenly I'm surrounded by friends.”