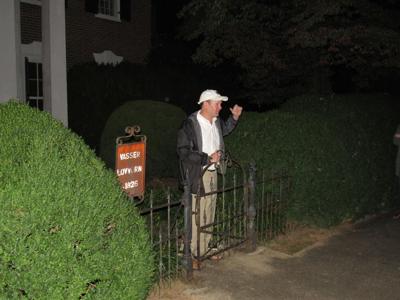 The annual Athens Haunt Walks will be held every Tuesday and Thursday night throughout the month of October. First walking tour is scheduled for 6:30 p.m. Tuesday, Oct. 5, followed by a second walk beginning at 7 p.m.

The walks are roughly 90 minutes and one mile in length starting from the Athens-Limestone County Tourism Association located at Big Spring Memorial Park.

Guests are asked to arrive 10-15 minutes before their scheduled tour time.

It is $10 for adults for ages 13 and up and $5 for children ages 12 and under. Purchase prior to the tour is required. Tickets can be bought at the Tourism Office Monday-Friday from 8 a.m. — 5 p.m.

The Haunt Walks are an annual tradition in Athens, dating back 15 years as it leads guests on a mysterious walking tour that uncovers paranormal activity and hauntings in the historic downtown district, according to the press release received by The News Courier.

“What is a better way to learn about your town than to walk with your group tour guide on a dark fog covered night as they set the scene where you are immersed in the characters and their past lives,” Teresa Todd, director of the Athens-Limestone County Tourism Association said in the release. “The thrill of the unknown is in the night air and everyone is listening, hanging on every last word.”

Tour guides will be Shane Black and Bill Ward during Tuesday's walks and Garth Lovvorn, Will Weir and Jamie Mikell will be the guides each Thursday night.

The release states it is suitable for adults and children from fourth grade and up.

Stories will include a college student who fell to her death and is said to still roam the halls of Athens State University's Founders Hall and the great 1893 fire that burned the wooden buildings on Marion Street. The tour will also include stops at Founders Hall where the students of then-named Athens Female Institute watched Union and Confederate soldiers battle and the steps of the Houston Library where a crowd gathered on the night voters elected George Houston as the state's first governor after reconstruction.

“Many participants come for the education; they see the tours as a way to get to know the history and the settlers of Athens,” Todd added in the release. “In past tours, new residents to Limestone County would participate to learn as much as possible about the lore and legends of the town they now call home.”

For more information, call the Athens-Limestone County Tourism Association at 256-232-5411.