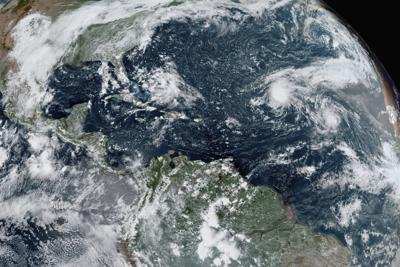 MIAMI (AP) — A tropical depression moving across the Gulf of Mexico has strengthened into Tropical Storm Sally and is threatening Florida with heavy rain, weather forecasters said Saturday.

The National Hurricane Center in Miami said the storm would bring heavy rain to the Florida Keys as well as southern and western parts of the state. Maximum sustained winds were clocked at 40 mph with higher gusts. Additional strengthening is expected over the next couple of days, and Sally is forecast to become a hurricane by late Monday.

“Since the system will be traversing very warm waters and through a moist air mass with moderate vertical shear for the next few days, steady strengthening is anticipated,” forecasters wrote in their 2 p.m. advisory.

Sally was located 35 miles south-southeast of Naples, the National Hurricane Center said. It was moving to the west at 7 mph. A tropical storm watch is in effect from the Ochlockonee River to the Okaloosa/Walton County Line.

The storm is currently expected to bring 2 to 4 inches of rain to parts of Florida, with isolated totals up to 6 inches. Meteorologists warn of an increasing risk of life-threatening storm surge and dangerous hurricane-force winds from southeastern Louisiana to the Alabama coast.

Meanwhile, Tropical Storm Paulette had maximum sustained winds at 70 mph and was 510 miles southeast of Bermuda, where a hurricane watch and tropical storm warning are in effect. Forecasters said Paulette would become a hurricane later Saturday and drop up to 6 inches of rain on the territory through Monday, adding that it is expected to be a “dangerous hurricane” when it is near Bermuda on Sunday night and Monday.

Tropical Storm Rene grew weaker and was reclassified as a tropical depression. It had maximum sustained winds at 35 mph and was 1,225 miles east-northeast of the Northern Leeward Islands. Forecasters said Rene wasn’t expected to strengthen and did not pose any threat to land.