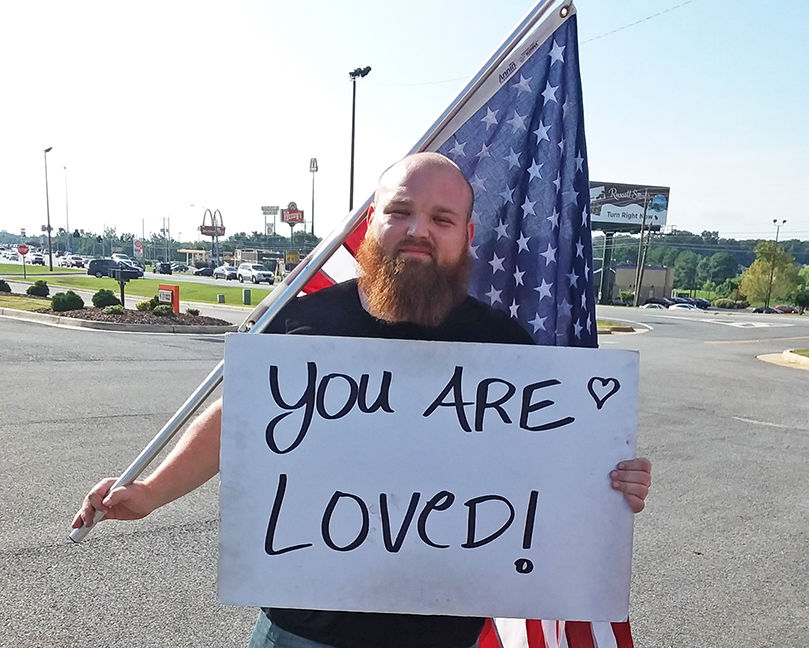 Caleb “the sign guy” Snell, 27, holds a sign he flies on area intersections to remind others they are loved. Snell has used the act of kindness as a way to battle his own depression. 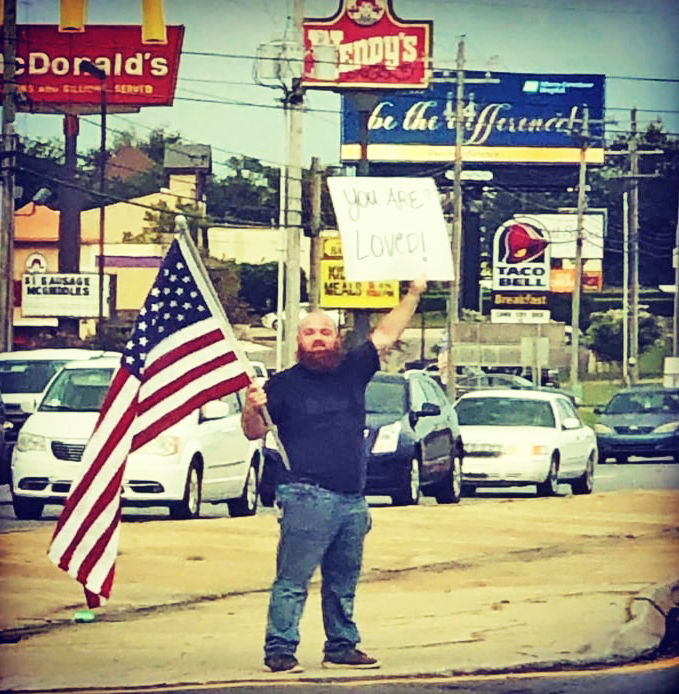 “The sign guy,” Caleb Snell, holds his “You are loved” sign at an intersection in Athens. He hopes to start a worldwide movement reminding others they are loved.

Caleb “the sign guy” Snell, 27, holds a sign he flies on area intersections to remind others they are loved. Snell has used the act of kindness as a way to battle his own depression.

“The sign guy,” Caleb Snell, holds his “You are loved” sign at an intersection in Athens. He hopes to start a worldwide movement reminding others they are loved.

Glance at Caleb Snell on the street and you could draw a lot of conclusions.

Seeing the burly man with a beard and tattoos, some might think he's down on his luck or up to no good. If a passerby sees he's holding a sign, they might confuse him with a panhandler.

It's been said that “what really matters is invisible to the eyes,” but what Snell is doing on area streets is completely visible to those who choose to pay attention.

Known around the area as the sign guy, Snell, 27, considers himself a servant of love.

In fact, the message he is sharing is all about the four-letter word — love.

Every sign he holds says “You are loved” on one side. The other side might contain phrases like “Your life has value” or “The world is better with you in it.”

His messages of love are positive and cheerful, but his life hasn't always been.

There was a time, about a year and half ago, when Snell's world was falling apart.

“I reached a point in my life where I felt like I had lost everything,” Snell said.

In the process of joining the military, he was denied entry due to a minor health complication.

Coming from a military family, Snell was never pushed to join the ranks. However, he felt there was something he was lacking as he got older. He wanted to be part of the brotherhood.

“I was desperately looking for somewhere to belong,” he said.

That wasn't all, though.

“I lost my job,” Snell said. “I had three weeks to move out of my apartment, and I was denied entry due to a heath issue.

“That just threw a wrench in everything,” he said. “So, I don't have a job. I don't have a place to live. I was really missing my ex at the time. She was on my mind a lot, and I was desperately missing her.

“I felt like everything I loved — everything I had been working really hard for — had just gotten ripped out from under me.”

His future wasn't shaping up to what he wanted it to be.

One day, Snell was driving through Huntsville back to his house and praying to God.

In the car, Snell said it all became clear.

“I wasn't crying or anything that like that,” he said. “There was just a clarity of 'I've reached my limit. I don't have anything left in the tank. This is all I have. This is going to be it.'”

When he drove through the intersection of Jordan Lane and University Drive, he said he felt a presence of what he believes is God.

“God was telling me I need to stand on that corner with a sign that says, 'You are loved',” he said. “It was the only thing God said.”

During the time, Snell was also suffering from insomnia. When he was sleeping, he said it was not the good kind of sleep.

At 3 a.m., he got up and went to Walmart, where he bought a bunch of sign material and a big Sharpie marker.

He made a couple of signs, but in his head he was telling himself, “This will be the last thing I do.”

Snell said he decided to be faithful, but he was only going to give it a week.

He told himself, "I'm going to get out there early in the morning as soon as the sun comes up and I'm going to start holding these signs. I'm going to be declaring to the world I am worthy of love and that the world would have been better with me in it," Snell said, admitting he was also thinking others will never know that because after this, "I'm done."

The signs were his suicide notes.

Every day for a week, he was at the intersection with the signs.

“I never experienced such a healing to my soul,” Snell said.

He compared the feeling to the machine used to shock the heart back into rhythm.

He didn't feel the same way he had felt five days before.

By loving people and seeing them smile, he started to heal.

“Every day, I got more excited about it,” he said.

By the middle of the week, he had music playing in his ears and he was dancing. Others were starting to pay attention.

By the end of week, Snell had found his passion. He had found healing through sharing his love with others.

“I truly believe if anybody wants to know how I feel you overcome depression, it's by loving on someone else,” he said. “If you want to feel better personally, find a way to make somebody else's life better. Even if it's something as simple as standing on the corner with a sign.”

Snell took some time off from holding the signs, but was led to hold them again.

He's been doing it pretty consistently over the last year, not only in Huntsville but in Athens, Madison and Decatur.

“I make sure I do it at least once a week for my own mental health,” Snell said. “If I find I'm starting to go down a dark road mentally, I get out there and start doing it. It reminds me I'm alive.”

Snell's passion for sharing love has also helped others. He's been approached by people who have told him they've been lifted by his “You are loved” movement.

He can count 18 people who told him they decided not to commit suicide.

“She was really struggling,” Snell said.

She told him she was praying to God that if he didn't give her a sign he loved her, she was going to take her own life so she could be with her son.

“She saw me on the street with the sign and said I held her life in my hands,” Snell said. “I lost it. I was crying.”

Snell is thankful he was there, no matter how heavily the situation weighed on him.

“I never in my wildest dreams thought somebody would walk up to me and say something as simple as a $2 sign saved their life,” Snell said.

Snell hopes the “You are loved” movement will spread nationwide.

He hopes it's a movement the encourages people to stop looking at each other as different.

“We stop seeing me as white or him as black or Muslim or Christian or Atheist or transgender or gay or straight,” Snell said. “I don't care.”

Snell sometimes carries an American flag with his signs. He believes though we are all different, we are all Americans and everyone deserves to be loved.

“I wish everybody in the world knew they were loved, but I'm here in America,” he said. “I see so much hate, but I can't complain about it if I'm not willing to do something about it.”

Snell is enjoying where it's at right now.

“A lesson I learned a long time ago is when a door is not open yet, you praise God in the hallway,” he said.

His biggest dream is for there to be a day, a week or a month when Americans put a pause on all "the bull,” buy a sign and stand on the street corners across the nation and share the love.

“If there were people on every major intersection of every major city, imagine the love that could go on,” Snell said.

Today, Snell lives in Athens, works as a CNC machinist and thinks life is pretty good. “You are loved” is tattooed on his forearm.

His ultimate goal is being able to make the movement a full-time gig. He would love to be able to fly signs of love across the nation through social media sponsorships. He also hopes others will find him on social media and share the love.

“Never forget you are loved,” Snell said. “Your life has value and the world is better with you in it. You are not alone.”

Snell said just because you see this big burly guy out there dancing and having a good time, it doesn't mean he's always been that way.

There is no doubt in his mind that others can get help with depression and come out of it.