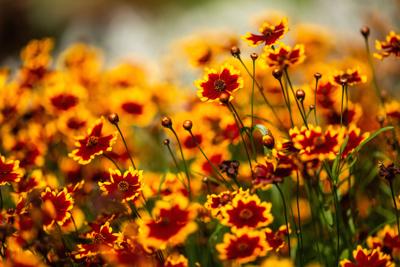 One of the things I like the most about being a master gardener is belonging to a group of people who like to swap plants. Two years ago, I had a bank of daylilies that needed to be divided. While they were all healthy, they also were starting to get overcrowded.

Without another place to put them, I offered them up to my gardening buddies. As luck would have it, another gardener was thrilled to get them, and in return, I was rewarded with a few containers of bearded iris that she was dividing.

Generally, every three to five years, most perennials eventually become overcrowded and require division to keep them healthy. As perennials grow, they expand in size by producing new growth progressively away from the center of the crown. In some plants, the older center of the crown is no longer productive and dies. It is best to divide plants while they are still healthy, before signs of decline become evident.

Always start with clean tools to avoid introducing disease. To divide perennials, dig out the entire clump with a shovel or garden fork. Knock off as much soil as possible so you can clearly see the roots and places where a natural division can be made. You may need to use water from the garden hose to really clean them so you can detect any insect or disease damage.

Divisions should usually have three to five shoots or growing points. Smaller divisions may take a year or two to bloom again. Discard woody centers of clumps.

The secret to success, according to the “American Horticultural Society Book of Plant Propagation,” is to “always have more root than shoot.” Cut away excess foliage until the plant is established. This will give the plant the ability to focus its energy on establishing the roots instead of promoting foliage growth.

While the plant is out of the ground, take the opportunity to amend the soil. If replanting in the same location, adding organic matter provides the new division with nutrients and also increases air and water flow. New areas being dug can be watered both before digging, making that task easier, and before replanting the divisions.

Never allow exposed roots to dry out. If you are unable to transplant divisions immediately, heel plants in. Heeling a plant in means covering the plant roots with a blanket of soil until you can plant them in their permanent location. This can be done directly in the ground or in a container filled with soil or peat.

The best time to divide plants is on a cloudy day, not only for your comfort but for the comfort of the plant. They experience less stress and recover faster if the sun is not baking them while they try to re-establish. This will also keep the roots from quickly drying out. Consider putting a sun shade over divided (and replanted) plants for a day or two if the forecast calls for extreme hot and sunny weather.

So, get digging and share or swap your newly divided perennials with a friend. Until next week, happy gardening.