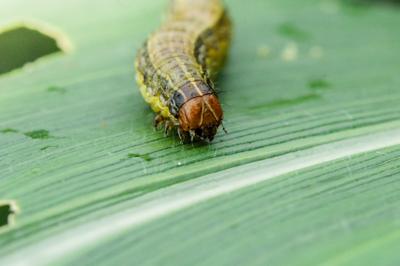 Early detection is up to you.

If your green grass starts to brown,

Army worms have hit the ground.

I asked my military husband if this was a good cadence song, and he approved. What he did not approve was the infiltration of a seasonal pest in our lawn that is causing our turfgrass to suddenly turn brown.

Fall armyworms are fittingly named — they are extremely fast and efficient when consuming their host of choice, for example, grass. According to the Alabama Cooperative Extension System, Alabama has experienced a high level of migrating fall armyworms. To complicate the matter, the state has also experienced above average rainfall, which creates a favorable environment for the eggs and larvae to survive in large numbers, as well as producing lush, green lawns and fields that make for an attractive buffet for fall armyworms.

The fall armyworm has four life stages: egg, larva (caterpillar), pupa and moth. Adult female moths are carried in on early spring wind currents from southern Florida, Texas, Mexico and South America, where they overwinter. The moth has speckled front wings and whitish, almost luminous, back wings. The female moth can live an average of 10 days but can live up to 21 days, and in her short lifetime, she can lay more than 1,000 eggs. The moth is capable of producing several generations in one year.

She lays between 50 to 200 eggs on the undersides of leaves or other light-colored surfaces, which will hatch in two to three days. Egg masses resemble small patches of pale gray or yellowish cotton. If detected in this early stage, egg masses can be removed by hand or sprayed off with a strong stream of water.

After the eggs hatch, they enter the larval or caterpillar stage. This is the destructive stage in the life cycle. The caterpillars range in color from tan to green to almost black. They have light-colored stripes along their sides and an upside-down “Y” shape on the front of the head. The larvae live for about two weeks. In the first 10 days of their life, they are small, do not eat much and are easier to control. In the last few days of their life, the now larger caterpillars have ferocious appetites, causing the most damage and becoming more difficult to eradicate.

The life cycle from egg to larva happens over a period of two to three weeks, at which point the larva burrows into the soil to transform over a period of about two weeks to emerge as a moth, its adult stage. It is almost like a butterfly emerging from its cocoon, but underground and not as pretty.

At this point, the cycle repeats, hence the ability to produce multiple generations in a relatively short time.

The pupa, the form that the armyworm takes underground between caterpillar and moth, cannot survive overwintering in Alabama. This is where the cycle ends, until new moths blow into town the following spring.

The fall armyworm attacks a variety of plants and grasses. They seem to prefer well-fertilized and maintained burmudagrasses but will also attack fescue, ryegrass, bluegrass and bentgrass. Although most of the damage is purely cosmetic, it can cause serious damage or even kill cool-season grasses, such as fescues, if they eat the plant down into the growing crown.

An abundance of bird activity, especially starlings, blackbirds and robins, feeding on lawns often is a tell-tale sign of the presence of armyworms. Armyworms are most active in early morning and early evening, chewing grass leaves, which causes the plant to dehydrate and turn brown. They feed near the lawn surface in the cooler hours of the day and may move below the surface of the lawn into the thatch during the heat of the day.

Red and paper wasps also feed on the larvae. If there is no noticeable bird or wasp activity, a soap flush can be used as a scouting method for detection. For a soap flush, mix 2 tablespoons of dish soap in a gallon of water. Using a watering can, pour the contents over a 1- to 2-feet square area. If larvae are present, they will come to the surface.

Mowing in the early morning or late afternoon and removing the clippings may remove a significant number of the caterpillars. If you choose to treat with an insecticide, application should also be during these times.

When looking for an insecticide, look for a product that mentions control for armyworms or caterpillar pests on the label. Product containing spinosad or Bacillus thuringiensis will control smaller larvae without harming the beneficial insects that reside in the lawn. Other active ingredients to look for on chemical control products are: bifenthrin, deltamethrin, gamma-cyhalothrin, imidacloprid and cyfluthrin, permethrin and trichlorfon. For additional information on these products, contact the Extension office or Co-op.

“Detection is the very first step,

To having a lawn that is well kept.

Use the measures of which I speak,

and happy gardening, until next week.”