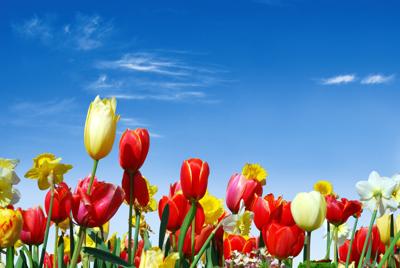 Ah, I love spring! The birds are chirping, lawns are greening up, trees are budding and sleeping perennials are starting to poke their heads from their underground beds. Three years ago, I planted tulip and daffodil bulbs around the base of a dogwood tree. The idea was that these spring bloomers would all burst on the scene together.

Tulips and other bulbs are planted in the fall in order to produce flowers the following spring. These bulb flowers require a certain number of chilling hours (under 45 degrees), called vernalization, from the Latin "vernus" meaning "of the spring." For instance, tulips require eight to 10 weeks of chilling hours during dormancy to produce flowers.

The first spring after I planted my bulbs, I had some leaves appear but no flowers. I attributed this to planting them a little late in the season and that they may have been affected by a particularly cold winter that year.

Both last year and this year, I again have plenty of foliage, but just one tulip and one daffodil emerged each year. It doesn’t take a genius to figure out that I have obviously done something wrong, especially since I have quite a few neighbors that have bouquets of them in their gardens.

So, I started to research and observe the area where the bulbs are planted, and it became clear that I had made a few mistakes. The first was not realizing they were not receiving enough sun. I know, rookie mistake. Tulips and daffodils alike require full sun, receiving at least six hours per day. My thought was that since the tree would not be fully leafed-out in spring, they would get plenty.

Upon further observation, the bulbs are planted on the west side of the tree, and even in early spring, it cast enough shade on the area that it wasn’t receiving any sun until late afternoon. In my yard, because of other trees, they were getting less than three hours of sun. Also, tulips aren’t tolerant of a lot of heat, preferring morning sun to the afternoon rays they were getting.

The second reason my lovelies may not be producing flowers is planting depth. The general rule of thumb — in this case, a green thumb — is to plant the bulbs two to three times as deep as the size of the bulb. For instance, tulip and daffodil bulbs are approximate 2 inches in height, so they should be planted about 6 inches deep.

Thinking they are delicate flowers and not wanting them to struggle, I planted them about 3 inches deep, which is way too close to the surface. I did manage to plant the bulbs facing up, with the root side down and the tip toward the top, so I get a point for that.

When it became evident that I was not going to get more than two blooms last year, I cut the foliage back to the ground and raised a plea to the patron saint of gardeners for a better showing this year. This was my third error. I don’t usually go 0 for 3, but here I am — killing it.

Although it may be tempting, the foliage should be left until it wilts to the ground completely and pulls away from the bulb easily. The foliage returns nutrients to the bulb, which gives them the energy to produce blooms the following year. While the foliage should remain, the flowers should be removed after they are spent so they don’t waste precious energy trying to produce seed.

The final reason why tulips may not bloom is, while daffodils bulbs will put forth blooms for many years, tulip bulbs become less likely to bloom after three to five years. At this point, they can simply be dug up and replaced. I could make the argument that the tulip bulbs have simply become too old, and it wasn’t anything I did wrong, but that would only explain away this year’s lack of flowers.

So, this fall, I will dig up my bulbs, discard any that are dry or damaged, and replace and replant them correctly in a more hospitable environment. Sometimes, the best teacher is trial and error. Until next week, happy gardening.