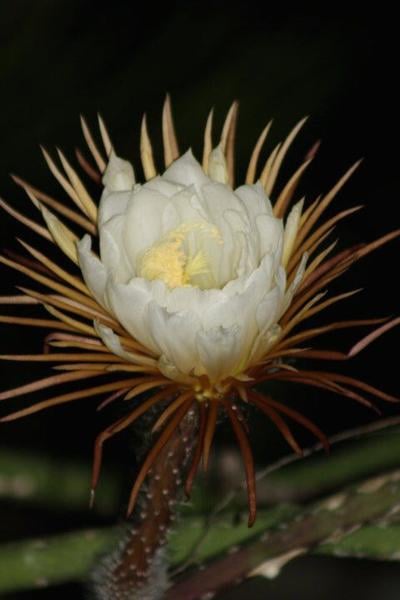 When a person thinks about the backdrop of a magnificent flower, the setting is probably one of it being surrounded by dense green foliage and bathing in glimmering sunshine. That is probably true for the most part, but there are a few plant species that worship the moon over the sun. One of these glorious blooming plants is the night-blooming cereus, also know as the "Queen of the Night."

I have only seen the beauty of these flowers through pictures, but now I will have the chance (hopefully) to see them up close and personal. My mother-in-law gifted me with two plants that she propagated from her mother plant, which was given to her by a friend. I love a good pass-along plant.

The large buds of this magical plant start to open in the evening hours and come into full bloom around midnight. The slender outer petals slowly unfurl to reveal broader, pure white, inner petals that surround a cluster of feathery yellow stamens. Enjoy them when you can, because these lovelies fade away by the early morning hours.

While you may be looking for a stem to shoot from the base of the plant to bear the buds, they actually protrude from the sides of the foliage. Night-blooming cereus may bloom under the light of the moon, but they require full sun during the day. If the leaves of the plant start to develop “burned” spots, some afternoon shade would be welcome.

First discovered in the jungles of Central and South America, cuttings made their way to Europe and eventually to the United States more than 200 years ago. Due to their tropical heritage, they are only considered perennials in the frost-free tropical south, zones 9–11; however, they easily adapt to being container grown and brought inside when temperatures drop below 55 degrees Fahrenheit.

Being of the cactus family, they require fast-draining potting soil, with one that is formulated for cactus being ideal. Otherwise, they can be planted in potting soil that has the addition of sand and perlite to allow water to drain quickly. If these easy-to-grow plants have a nemesis, like most cactus, it is overwatering. Plants should dry out between waterings; however, when it is time, water thoroughly until water runs through the bottom of the container.

Of course, I would love to have my night-blooming cereus dazzle me this year. Unfortunately, it is common for them to hold off blooming until they are 4 to 5 years old, but that can vary significantly depending on the plant. When the plant does begin to bloom, you will get a few flowers at first, and then as the plant ages, it will increase in the amount and frequency of the blooms.

Although some plants may get vigor from being repotted, the night-blooming cereus is not one of them. They prefer to be potbound, meaning the container will be filled with a dense tangle of roots. If every inch of the pot isn’t filled with roots, hold off repotting. When repotting becomes necessary, move the plant to a pot just slightly larger than the one it is coming out of.

Some gardeners don’t feel the need to fertilize; however, if you are trying to encourage the plant into bloom, a fertilizer with a higher phosphorus content may do the trick. The three numbers that appear on fertilizer — for instance, 12-55-6 — represent the content of nitrogen, phosphorus and potassium. In simple terms, nitrogen takes care of the foliage, phosphorus encourages flowers and potassium builds roots. If using, fertilizer should be applied at half-strength.

The blossoms of the night-blooming cereus may be stunning, but the foliage is sort of underwhelming.

Not that it is ugly, but the plant has the natural tendency to become leggy and roam, giving it an unkempt look. It can be pruned back to maintain form, and being that they are an easy plant to propagate, the cuttings can be used to form new plants.

I have high hopes of my plants getting large, but since I will be moving them with the changing of the seasons and because of space restrictions, I am going to set mine up to be trellised, allowing me to keep them somewhat contained and easier to move.

Add intrigue to the garden by inviting the Queen of the Night to glow in the midnight hour’s moonlight. Until next week, happy gardening.