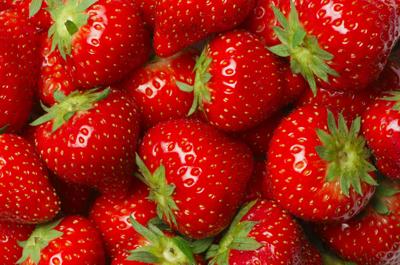 As a foodie, when I think of delicious, sweet strawberries, my mind goes to summer. As a gardener, on the other hand, I think fall. Strawberries established in the fall will have a much higher yield the following season. I use strawberries often in summer dishes, so a high yield is definitely what I’m looking for.

June bearers, as their name suggests, bear fruit in June. They produce one large crop of fruit, over two to three weeks, each growing season. Ideally, for this reason, gardeners plant at least one early, one mid-season, and one late season cultivar to spread out the harvest season.

Following are a few suggested varieties, listed in order of bloom time (BT) and includes yield (Y), and size (S):

As with other fruit-producing plants, strawberries should receive at least six hours of sun per day. They can be grown in partial shade, but the fruit yield will suffer. In hotter climates, during the heat of summer when temperatures rise above 85 degrees, strawberries benefit from the use of a 30-percent to 60-percent shade cloth. The percentage of shade cloth refers to the percentage of the sun and UV rays blocked. It filters light to reduce plant stress and prevent the leaves from burning and the soil from drying out too quickly.

A soil test should be performed so that adjustments can be made before planting to reduce injury to the plant. Soil pH should be between 6.0 – 6.8, with a desired 6.2 for optimum growth. Apply the recommended potassium and phosphorus before planting and till into the soil. At planting, use 3 pounds (6 cups) of ammonium nitrate per 100 square feet (10 ft. x 10 ft.), and again in July.

Following the establishment year, make the first nitrogen application when new growth appears in spring. Make a second application during renovation and the last application in September. Use 3 pounds of 10-10-10 fertilizer for each application. Renovation is the time when you remove the older plants that have decreased in production to make room for the daughter plants, often called runners. Each strawberry plant can produce for two to three years. The daughters then become the mother plant.

Strawberries should not be planted where plants of the Nightshade family have recently been grown because it leaves the plant susceptible to in-common diseases such as Verticillium wilt. Nightshade family members include tomatoes, peppers, eggplant and potatoes.

June bearers do best when planted in raised rows that are 24 inches wide. Space plants 18 inches apart in the center of the raised mounds. This allows for proper irrigation and gives the daughter plants room to develop. Plant so the crown of the plant is slightly above the soil line. The crown is where the stem meets the roots.

Strawberries should be watered daily for 7 to 10 days while roots are becoming established. After they become established, reduce water to 1 to 2 inches per week. Strawberry plants should be mulched, not only to help maintain soil temperature and moisture, but also to help keep fruit clean and prevent fruit rot.

Straw is traditionally used to mulch strawberry beds, but other mulches, such as pine straw can be used. Cover plants with 3 to 4 inches of straw mulch when freezing temperatures are forecast until the threat of damage has passed. Then spread the straw mulch out around the plant for the growing season.

Line the bottom of a cake pan with parchment paper; place brie in the pan and bake for 15-20 minutes until brie is soft. Note: keep and eye on the brie and remove when just soft, as the casing will split and the brie will run out if overcooked.

Mix balsamic and brown sugar together in a small saucepan and heat over high heat until boiling. Reduce heat and simmer for 20 minutes until thickened.

Toast pecans in a dry skillet; chop into small pieces.

Mix together strawberries, pecans and 2 tablespoons of the balsamic glaze.

Top brie with strawberry mixture and drizzle with more balsamic glaze and chopped basil. Serve with toasted baguette or crackers.