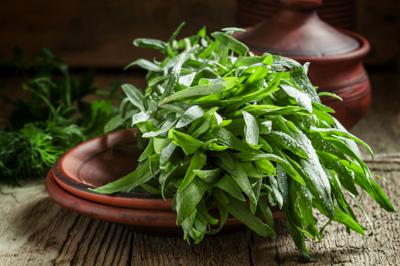 Last week, I wrote about basil, the herb that we have dubbed the king of the herbs. Well, it turns out that the French also use that moniker.

However, they use it as a reference to tarragon. Although there are three varieties of tarragon — French, Russian and Mexican, and each has a distinct warm aniseed flavor — the French variety is the one most often used culinarily.

Tarragon is one of the key ingredients, along with parsley, chervil and chives, in “Fines herbes,” the staple combination of seasonings in French cuisine.

Tarragon lends its unique delicate flavor and bright color to the ever popular green goddess sauce. Mixed with chives, parsley, scallions, mayo, anchovies and tarragon vinegar, the dressing was first presented in 1923 by Chef Philip Roemer of the Palace Hotel in San Francisco and is a variation of “sauce au vert,” said to have been created by the chef to France’s King Louis XIII in the 1600s.

Thought to be native to Siberia or Mongolia, the name tarragon, also known as estragon, is actually a corruption of the French “esdragon,” which was derived from the Latin “dracunculus,” meaning “a little dragon.”

The name can most likely be attributed to the look of tarragon’s root system, which grows in a serpentine manner. Because of this, folklore tells of tarragon being used to treat the bites of venomous snakes and reptilian beasts.

In contrast to the dark roots of its name, the perennial herb is part of the sunflower family. Not surprisingly, it is high in Vitamin C, which helps to boost the immune system and fight off those dragon bites.

Tarragon is also rich in Vitamin A and particularly high in potassium, calcium, iron and other beneficial minerals. Medicinally, tarragon has been used to spark the appetite, soothe indigestion and toothaches, and studies show it may decrease blood sugars.

Tarragon is a perennial plant that will come back each year. Unlike most herbs, tarragon is not a full sun plant, preferring morning sun and then partial shade or dappled sun throughout the rest of the day.

It is a drought tolerant herb that grows best in well-drained, sandy soil with a pH of 6.5 to 7.5. It does not produce well in acidic soil.

Tarragon can tend to get a little leggy if not harvested regularly. To promote the plant to become bushier, harvest the top leaves of the plant frequently when the plant reaches a height of at least 6 inches. Stop harvesting about a month before the expected first frost.

Propagation is generally done from cuttings, being that the plant produces very few flowers which are sterile. The root system can also be dug up and divided. This is best done in late winter when the plant is in dormancy.

Tarragon pairs especially well with milder ingredients such as chicken, eggs, cheese and in creamy sauces, spreads and dressings. The following recipe is a French classic and sure to have your family applauding, “c’est bon.” (It’s good). Until next week, happy gardening.

Salt and pepper to season

• Wash thighs under cold running water; pat dry completely. Season both sides with salt and pepper; set aside for about an hour to come to room temperature.

• Heat a large, oven-safe skillet over medium heat. Add butter. When butter is hot and sizzling, add chicken pieces, skin side down in the skillet. Cook until skin is golden brown, about 8-10 minutes. Flip chicken and cook for an additional 10 minutes. Transfer chicken to a plate and cover with foil.

• Add onions to the pan and cook, stirring occasionally, until onions are lightly caramelized, about 10 minutes. Stir in garlic and continue to cook, stirring, for an additional two minutes.

• Spread onions out evenly over the bottom of the skillet; return chicken pieces, skin side up to the pan.

• Sprinkle the chopped tarragon evenly over the chicken. Pour the chicken stock and white wine into the pan, add grated lemon zest; bring to a simmer.

• Remove from the heat; cover tightly with foil and place in preheated oven on the center rack. Cook for 30-40 minutes until chicken is tender.

• Carefully remove the skillet from the oven and place back on the stove over medium heat. Remove the chicken to a plate and cover. Stir the cream into the pan and simmer, stirring continually, until the sauce thickens, about 5 minutes.

• When sauce thickens, place chicken pieces back into the pan, turning to coat, and cook for an additional 5-7 minutes, uncovered.