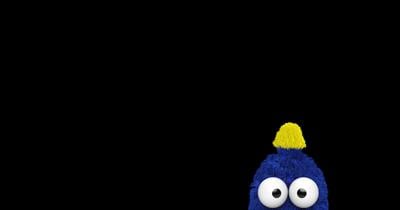 I don't know about your place, but my staircase has one light but two light switches — one at the bottom of the stairs and one at the top. So, the nightly routine is turn the light on as I head up the stairs for bed, then turn it off once I'm at the top of the stairs.

I am a woman who likes routine and isn't too fond of surprises, so you can imagine my dismay when I dragged my tired body to the stairs a few nights ago only to find the downstairs light switch wasn't working. At least, it wasn't turning the light on.

I even flipped it up and down a few times to confirm.

Another thing about me — I really don't like the dark. It's not so much the dark on its own, but the things that might be lurking in the dark. Still, blown lightbulbs happen.

So, I took a deep breath and did my best to convince myself that I'm a big girl and surely 2020 will not include The Night Jessica Got Famous For Discovering Monsters Are Real Because One Attacked Her While She Was Wearing Backstreet Boys PJs.

But, just in case, I scanned the living room for possible weapons. The coffee table and laundry hamper are light enough to possibly be thrown in a monster's path. Worst case scenario, I could chuck a pizza box and old soda can at their head while I scramble to unlock the door and run for my life, mentally thanking myself for being too tired — well, lazy — to clean up dinner immediately after consuming it.

In the meantime, here's to the inventor of flashlight apps for smartphones.

So, scary dark staircase ahead. Here's another to the tall men in my family, because it only takes three steps to be eye-level with the light bulb, and while I'm thinking of it, might as well check to make sure it's really blown.

I've seen enough movies to know half-twisted bulbs are a thing that creepy serial killers do sometimes, and it is 2020, after all.

As it turns out, the bulb was twisted in completely. I flashed my phone light at the bulb and felt my heart sink as I realized there wasn't even a twisty metal thingy separated from all the other bits that make a light bulb light.

In other words, it's official.

There's a monster at the top of the stairs.

But, there's also my bed.

I really wanted to be in bed.

And honestly, I mean, I'd been home for three hours, so surely if something was going to go through all the trouble of messing with a light bulb so I'd have to encounter them in the dark, they'd at least have the decency to get bored and shuffle around while waiting on me to finish exhausting myself with Hulu and TikTok, right?

Another deep breath. I flashed my light up the rest of the stairs. Another step or two, then a peek across the landing to the bedroom.

Door's open. Light's out. Nothing visible under the bed.

These could be good things, but who knows these days.

Another step. I couldn't hear anything over the fan I keep going 24/7, but at least that meant the monster hadn't messed with it.

I braved a quick scan of the ceiling. There's a square that would go to the attic in most homes, but my home has no attic that I'm aware of. I've named it "The Ceiling Square That Leads Who Knows Where," and I felt a little safer when I noticed it hadn't been obviously tampered with.

Also, the guest room and bathroom were clear. That's good.

Top of the stairs. Still no signs of monster. I moved my light over to the upstairs switch...

...and let out a large sigh of relief as I realized it's stuck halfway between on and off, thus preventing the downstairs switch from working. I quickly reached out and flipped the switch to "on," flooding the stairs with each one of those beautiful, blinding watts.

I flipped on the bedroom light, then flipped the staircase switch back to off — completely off.

It felt so nice to be back in my routine. I shut the bedroom door and flipped the light back off before making a dive for my bed.

I was feeling so safe in my new conviction that it was my own silly mistake, I decided the best use of my time and waning energy was staying up even later to share my most recent blonde moment on social media.

It wasn't until I was nearing the end of the saga that would eventually become this column that I realized flipping a light switch only halfway would be a much smarter move than messing with the light bulb.

Especially if you're a short monster.