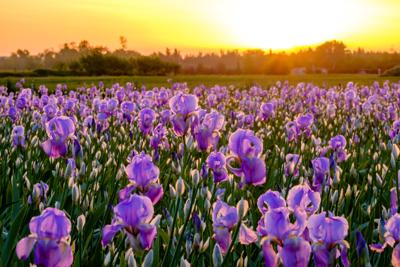 Whenever I am writing about a particular flower, the first piece of information that I want to know is its origin — where did it come from, how did it get here, and how did it get its name? Many times, I find that it started in Asia or Europe and was brought to the United States by a traveler who couldn’t live without having said flower in their garden. Interesting, but nothing extraordinary.

Well, iris are anything but ordinary! In Greek mythology, the messenger to the gods would travel to earth on a rainbow, and anywhere she stepped, a colorful flower would grow. The messenger, as well as the Greek word for rainbow, is Iris. Aptly, the showy flowers of the iris come in a rainbow of colors.

No less fascinating, and a little more down to earth, is the story of King Thutmose III of Egypt, an avid gardener, who ruled from 1479–1425 BC. During campaigns to conquer Syria, he came across the iris flower, which grew there in abundance, and it is said that he was the first to use them in a cultivated garden.

Late summer is the ideal time to transplant these beauties. This gives the iris a chance to establish its roots while there is still enough sunlight to coax its growth, giving it the ability to survive the winter.

Pick a spot with six to eight hours of full sun per day. They can do well in constant sun, however, will do best if planted where the sun hits in the late afternoon or gets lots of morning sun but receives the shade of a tree or structure in late afternoon.

Iris like a slightly acidic soil with a pH of about 6.8 to 7.0, and well-drained soil. Iris do not like wet feet, which leave them susceptible to root rot if overwatered or allowed to stand in overly wet soil. For heavy, clay-rich soil common to our area, add humus or organic matter, or plant on a slope or in a raised flower bed that can help with drainage.

The rhizome, which is the brown, root-like portion of the plant that resembles a potato, prefers to be slightly exposed to air and sunlight. For this reason, when planting, the rhizome should be at least half visible above ground. The roots on the underside of the rhizome should be arranged so they spread downward into the soil. Plants should be spaced at least a foot apart.

Give the iris a thorough watering after planting. If it is particularly dry and hot, iris can be watered every seven to 10 days as needed. You can stop watering when the weather turns cool.

Snowfall will insulate the ground; however, we can’t always be guaranteed snow in our corner of the world. Iris will benefit in winter from a thin layer of mulch to protect the ground and prevent heaving. Heaving is the process of the ground freezing and thawing repeatedly, causing the soil to contract and then expand, lifting the rhizomes up and eventually exposing the roots. Mulch should be removed after the last frost.

In spring, iris benefit from a light application of fertilizer. You don’t want a fertilizer high in nitrogen which will cause excessive leaf growth, but one that has a higher percentage of phosphorus that promotes bloom and root growth. Use a general purpose 5-10-10 fertilizer (5% nitrogen, 10% phosphorus and 10% potassium). Apply fertilizer approximately 6-inches from the rhizome to prevent fertilizer burn.

Iris are perennial flowers that will spread from the roots. After a few growing seasons, it may become necessary to divide the iris to avoid overcrowding, forcing them to compete for water and nutrients.

From the feet of a goddess or the garden of kings, iris bring a rainbow of beauty wherever they stand. Until next week, happy gardening.