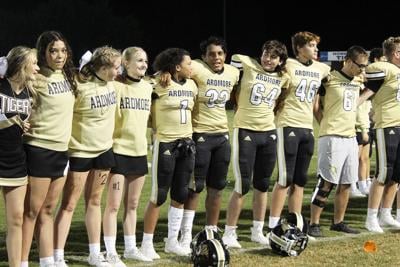 The Ardmore Tigers defeated the Elkmont Red Devils 42-0 on Friday in the renewal of the county rivalry and the homecoming game for the pride of the state-line.

The Tigers played well from start to finish that saw them execute in the run game as well as the pass game. Their ability to attack from both facets put them up early.

Quarterback Brayden Hillis played well, running backs Thomas Colston and Skyler Jean played well, as did receiver Noah Stafford, along with the entirety of their defense.

Afterwards, Ardmore head coach Jonathan Snider said his team did what they needed to do avoiding distractions, locked in during the entirety of the game.

“My message this week was: no one will remember what you dressed up as Tuesday, but they will remember what the final score was Friday night. Our kids did not allow all the other distractions to affect them and they came out and played well,” Snider said. “That was one thing we talked about this week. Don’t be (a distraction) and don’t be a part of one.”

Colston would score three rushing touchdowns, Hillis would pass for two touchdowns – one to Stafford and one to Peyton Hargrove – and Jean would add another rushing touchdown that saw them play efficient on both sides of the football.

The biggest scoring plays of the night would come on a Hillis screen pass to Stafford, who would take it to the house from 30 yards out, and Jean’s touchdown run of 34 yards.

The Tigers would end the game 42-0, with 278 yards rushing and 112 yards passing on zero turnovers.

The Red Devils would end the game with one turnover on the fumble early on in the competition, not including turnovers on downs.

Snider says winning a county rivalry game is always special. Elkmont was commended for their resilience by Snider.

“Wins, you know, you have to be excited about them regardless of who you play,” Snider said. “Elkmont fought their guts out. Coach Bunio (of Elkmont) has them going in the right direction.”

The Tigers are also winners of three in a row, with the previous two wins before Elkmont coming against Brewer and Lawrence County.

“These kids are rallying. We will get back in region play next week, and hopefully these past three weeks have given us a little bit of a boost,” Snider said.

Ardmore (3-2) now moves on to face Fairview (4-1) at home in a pivotal regional matchup. Fairview was off this week on their bye.

The Red Devils (1-5) now travel to Tuscumbia to take on Colbert Heights (2-3). CHHS was on a bye this week.

Do you shop local when you can?