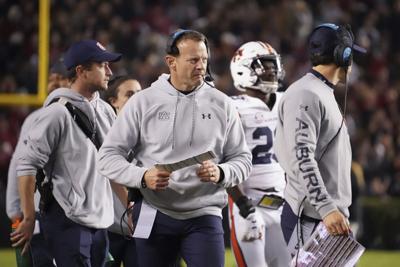 Week 2 of college football features games that can determine trajectories for the rest of teams’ seasons.

Alabama and Auburn have very different games ahead of them today, as the Tide travel Austin to play the Texas Longhorns and the Tigers host San Jose State.

However, Alabama and Texas is not the only marquis matchup of the weekend.

Here is a look at today’s games.

The Tide’s second game of last season was against the Florida Gators in the Swamp, and this game will have much of that same feel.

Texas will be highly motivated to make a statement early on and prove they are actually back.

Head coach Steve Sarkisian can downplay the significance all he wants, but this game is massive for Texas.

Arkansas is opening up as 8-point favorites, which makes sense considering they are hosting the Gamecocks, where they have one of the better home field advantages in the SEC. It also doesn’t hurt they are riding a Top 25 victory over Cincinnati in week 1.

However, anyone who watched the game knows the Bearcats had their chances.

Look for a well-coached South Carolina team to be highly motivated.

A huge game for two programs trying to continue their upward trend in the sport.

Tennessee is a team that impressed under the first year of head coach Josh Huepel.

Pitt was the victor of one of the best starts to the college football season in recent memory, when they defeated arch rival West Virginia in a classic Backyard Brawl on Thursday of week 1.

A matchup of two Texas teams with 1-0 records has both teams feeling wishy-washy after the happenings of week 1.

For the Cougars of Houston, they did not perform well versus UTSA, despite winning the game.

For the Red Raiders of Texas Tech, they are without their starting quarterback Tyler Shough after getting injured in week 1 after transferring from Oregon.

Whichever team wins this one is going to set themselves up very nicely for a good bowl slot.

Will Levis vs. Anthony Richardson will be a fun one to watch.

This annual rivalry game has had its fair share of high SEC East stakes in recent years, and that will be the case once again as they open conference play with each other.

For Florida, the Swamp is still riding high after their defeat of formerly No. 7 Utah and will look to play a significant factor as the Wildcats come to town.

For Kentucky, many believe they could be the second-best team in the East, assuming to be behind Georgia.

Another early-season rivalry game has the Trojans – with their stock always rising these days – taking on the Cardinal of Stanford – consistently average since the departure of Christian McCaffrey.

USC impressed with three defensive touchdowns in their opening game of the season, and transfers Caleb Williams and Jordan Addison connected early for a touchdown that is a pairing certainly destined to be a problem for opponents moving forward.

Auburn should win handily in this game.

However, look very closely at how the Tigers execute a week before Penn State comes to the plains in what will be a career-defining moment for head coach Bryan Harsin.

The Bears and the Cougars are looking for a season-defining matchup early on in the season that could very well make a difference in the College Football Playoff selection committee’s eyes.

These are also two schools who will be conference opponents shortly, with BYU set to join the Big 12.

An SEC team is in this week two football edition of #Pac12AfterDark.

This one will be particularly interesting not only because of the time and place of the Bulldogs’ game, but also because of what looks like could be quite a mismatch in the traditionally lackluster defense of the Wildcats going up against the high-octane offense of Miss State.

The Bulldogs enter this game as 10-point favorites.

Are you happy with your home's internet speed?