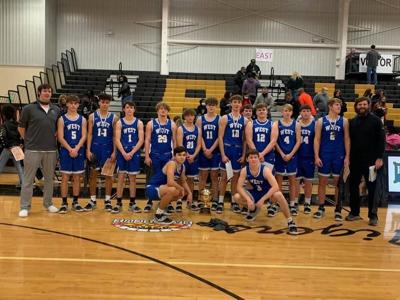 It is almost that time of year again where the annual Limestone County Tournament takes place for six teams.

The county tournament begins on Jan. 17 and ends on Championship Saturday, Jan. 22.

This year, the tournament returns to its normal format after COVID complicated things for last year’s tournament.

The tournament, according to Limestone County AD Rusty Bates, will be hosted entirely at one school: Ardmore.

Last year, each of the six schools hosted games due to the COVID complications.

Each school rotates hosting the event, with last year not counting due to the circumstances and all schools hosting some games.

“It is a big deal around here,” Bates said. “It is great for the players and great for the community. It is going to bring back the fans who wants to be able to watch it.”

The county tournament is a long-standing tradition in Limestone.

It has been going on for decades, usually around Martin Luther King Day.

“I graduated in 1999 and it still had been going on for a long time then,” Bates said.

The tournament will begin at Ardmore on Monday morning, with six to eight games taking place that day, followed by additional games on Tuesday.

There will be a break from action on Wednesday before returning to the floor on Thursday and Friday before Championship Saturday.

The teams will be seeded and the bracket will be formed near the beginning of the month. As it currently stands, the teams current records, as of Tuesday, Dec. 21, are as follows.

Last season, West Limestone won the boys varsity tournament over East Limestone by a final score of 35 to 25.

The Tanner Rattlers won the girls varsity tournament over East Limestone as well, in an overtime thriller, by a final score of 60 to 59.

This year will feature three levels of teams in action, with varsity, junior varsity and middle school all participating, according to Bates.

Seeding is subject to change as more games are played before the start of the tournament. Updates on seeding will be provided prior to the tournament starting.

The six schools are differing between taking a brief holiday break and staying active on the court over Christmas and NYE.

Pauline Grace McBay of Athens, Alabama, died Friday, May 20, 2022 at her residence. Services were Monday at Roselawn Cemetery. Funeral Home in Athens directed the services.