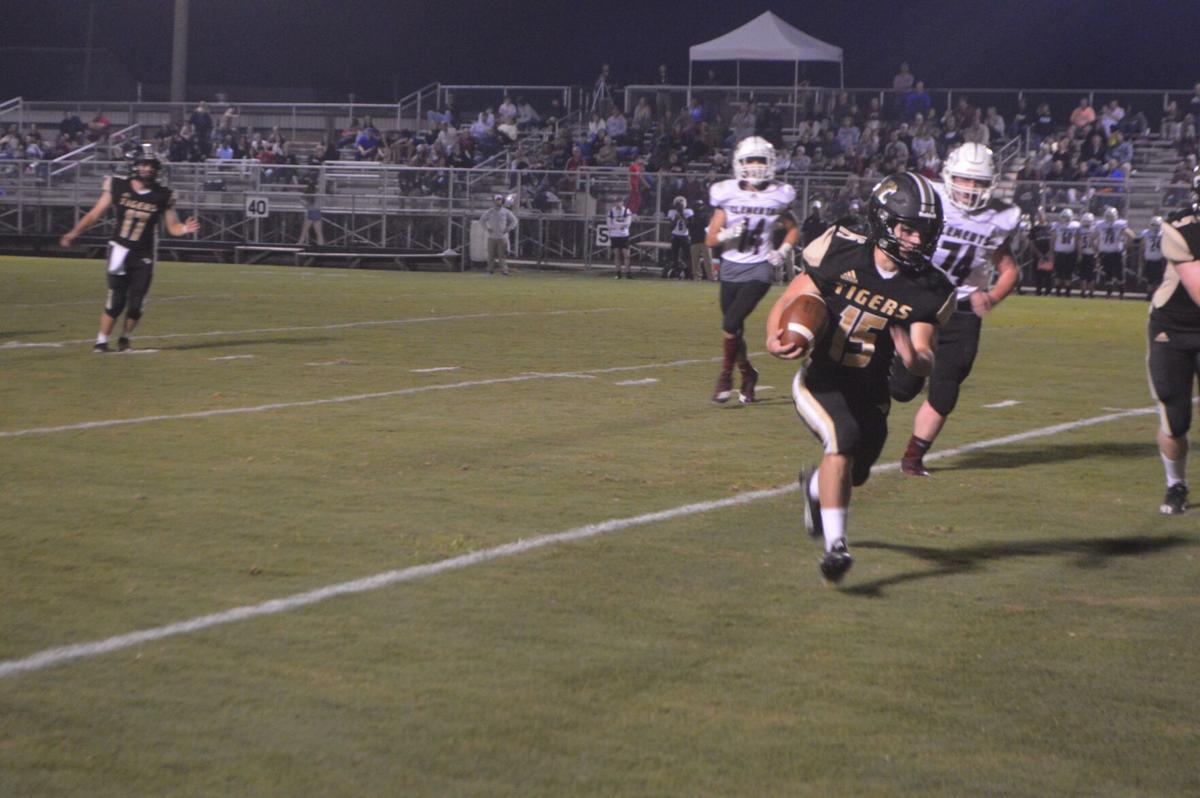 Ardmore running back Trevor Sims runs the ball in the matchup against the Clements Colts Friday night at Ardmore High School. 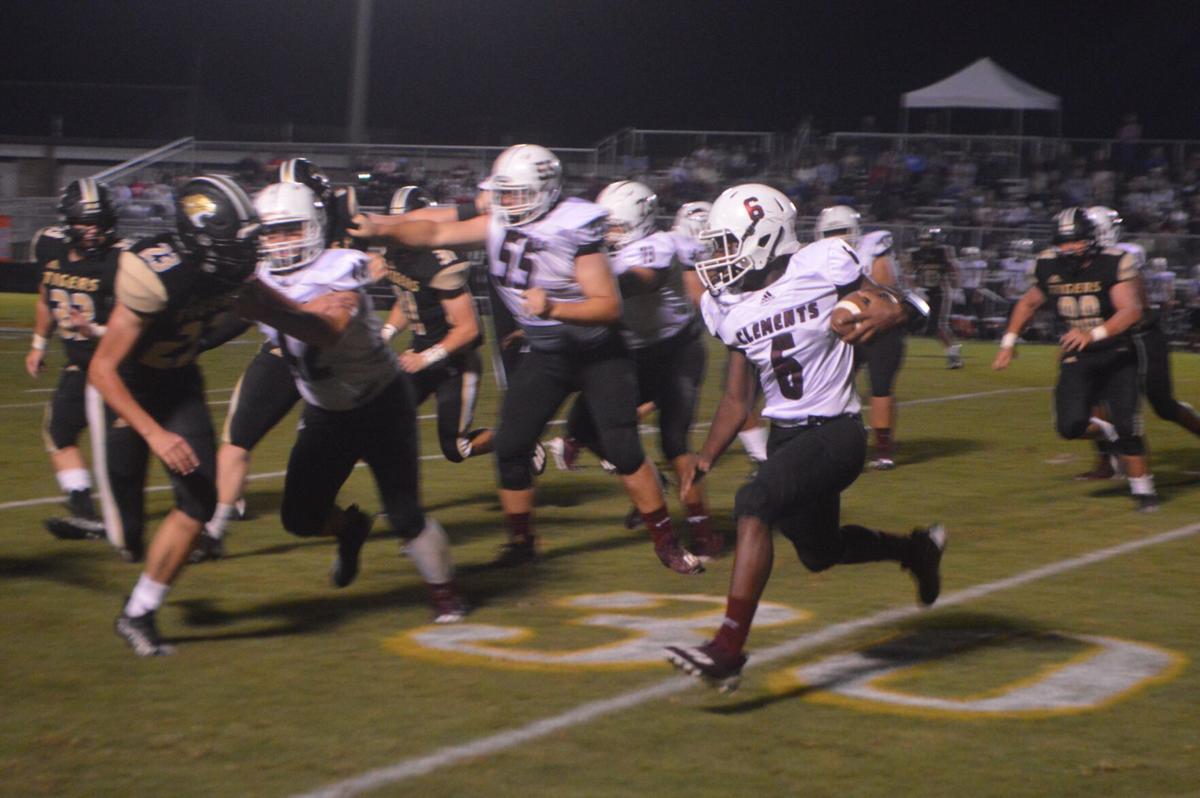 Clements quarterback runs toward the sideline in the matchup against the Ardmore Tigers Friday night at Ardmore High School.

Ardmore running back Trevor Sims runs the ball in the matchup against the Clements Colts Friday night at Ardmore High School.

Clements quarterback runs toward the sideline in the matchup against the Ardmore Tigers Friday night at Ardmore High School.

A high-powered offense by the Ardmore Tigers, including seven total rushing touchdowns in the game by the Tigers offense, led the way to a 55-27 victory over the Clements Colts Friday night on Cooper Field at Ardmore High School.

With this win, Ardmore remains undefeated with a record of 5-0.

Ardmore got on the board early in the first quarter. Brody Dunn, a senior H-back, took a direct snap into the end zone for a 7-yard touchdown run with 9:07 left in the quarter.

After a three-and-out by the Colts offense on their first possession, Ardmore went right back to the ground game, this time with Trevor Sims rushing in for a 17-yard touchdown run to put the Tigers up 14-0 after the extra point.

Three possessions on offense for the Tigers resulted in three touchdowns. Dunn once again took the direct snap 49 yards into the end zone for his second rushing score of the game.

But Clements was able to put points on the board as time expired in the first quarter. Ian Ezell took the reverse from quarterback Jayden Gilbert 60 yards for a touchdown. After the first quarter of play, Ardmore had a 21-7 advantage.

While the run game was a strength for the Tigers, the passing game got in on the scoring. Quarterback Brayden Hillis completed an 18-yard pass to Preston Patterson for a touchdown early in the second quarter.

Clements also used their speed in the run game to their advantage as Gilbert responded after Ezell's 60-yard touchdown run with his own 60-yard quarterback keeper for a touchdown. The point after was blocked, keeping the score 28-13.

Ardmore's Thomas Colston bulldozed his way in for a 15-yard score on the next drive, plowing over the Clements defender at the goal line to give the the Tigers a 35-13 lead at half.

Ardmore elected to receive after winning the coin toss to begin the game, giving the Colts the ball to open the third quarter. Gilbert found wide receiver Dylan Patrick on a deep ball that was highly contested but brought in by the Clements receiver, who then ran in to complete the 81-yard touchdown pass. The two-point conversion attempt by the Colts was unsuccessful.

The Tigers quickly responded on their very next drive. Dunn took the direct snap and scampered in for a 1-yard touchdown run, his third of the game, to put the Tigers up 42-19. Dunn tallied his fourth rushing touchdown of the game on the opening play of the fourth quarter with an 8-yard touchdown run. After the missed extra point, the score was 48-19.

Ardmore added their eighth touchdown of the game with 3:54 left in the game, their seventh coming by way of the ground game, on a Trevor Sims 39-yard rushing touchdown.

Clements added one more touchdown before the clock hit zeroes on a Westin King 4-yard rushing touchdown and a successful two-point conversion run to the outside by Gilbert.

“Offensively, we played really well,” Ardmore head coach Jonathan Snider said. “Defensively, we were not very good. Our first two drives were three-and-outs, our kids sort of relaxed a little bit and lost the focus.”

But Snider was quick to give credit to Colts and the talented athletes they have on their roster.

“We preached to our team all week that they had three guys that can outrun anybody on our team. Their athletes can make plays,” he said. “But we weren't doing what we were supposed to do and it backfired on us a little bit.”

With all that said, a win is a win for Snider, but he understands work needs to be done before the showdown with Russellville Friday.

“I'm proud of our kids. They're in situations that they haven't been in, they're fighting through it and I couldn't be happier for them,” he said. “But we got to go back and get some things fixed. I don't want this 5-0 record to blindfold us.”

The Tigers haven't been 5-0 since 2013, and while Snider admits it's a lot better than the alternative, he doesn't want his team to get complacent.

“It's something the kids can always remember,” he said. “We just don't want to be satisfied where we are. These kids got to understand that we still have a whole season ahead of us where we're getting into the teeth of our schedule and have to get ready week after week.”

Clements (0-5) will be back at M.T. Newman Stadium Friday against Lauderdale County (6-0).