Cole Cheatham stands for a photo Wednesday in front of the backstop on the baseball field at Ardmore High School. 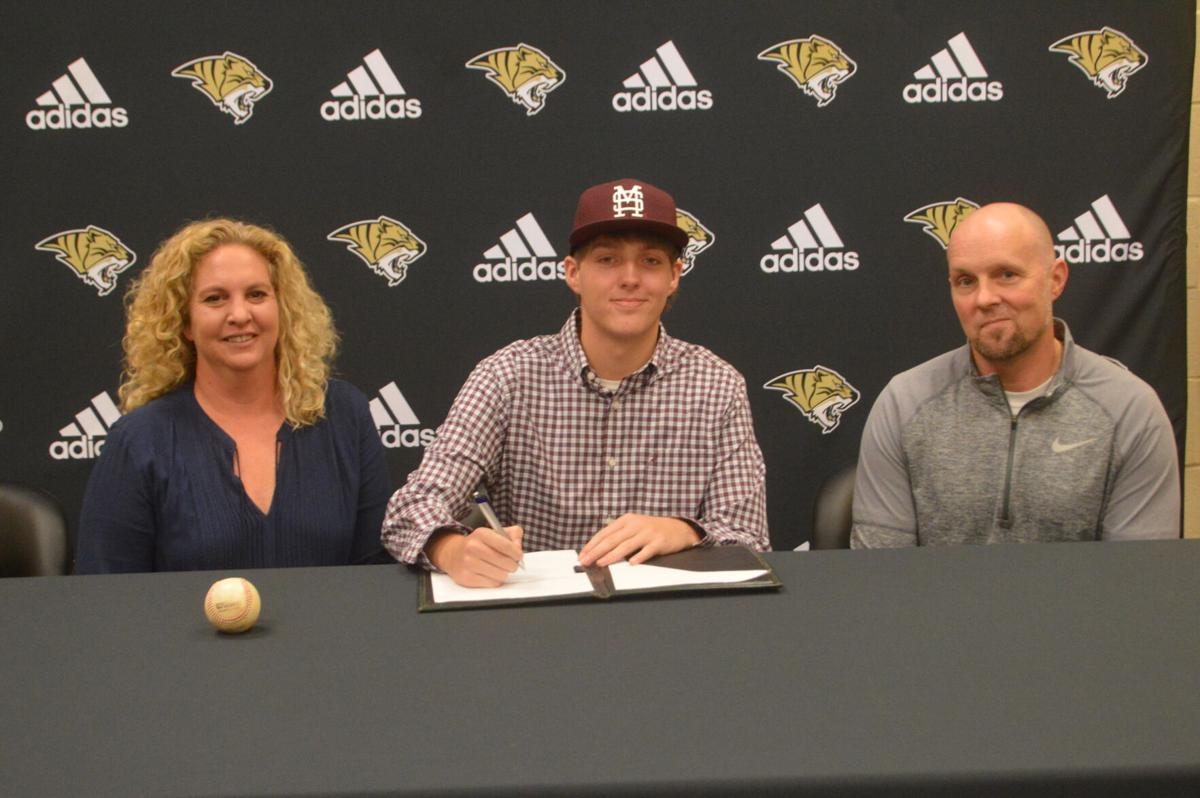 Ardmore senior pitcher Cole Cheatham sits between his parents, Bruce and Lesley Cheatham, as he signs his letter of intent to accept a scholarship to play baseball at Mississippi State University during a signing ceremony at the high school back in November 2020

Cole Cheatham stands for a photo Wednesday in front of the backstop on the baseball field at Ardmore High School.

Ardmore senior pitcher Cole Cheatham sits between his parents, Bruce and Lesley Cheatham, as he signs his letter of intent to accept a scholarship to play baseball at Mississippi State University during a signing ceremony at the high school back in November 2020

Growing up in an athletic family with his parents being former collegiate athletes and an older brother who played basketball, sports were always a passion for recent Ardmore graduate Cole Cheatham.

From playing sports with his friends growing up in Huntsville to the first time he started playing baseball at 4-years-old, he realized fairly quickly that baseball was his sport.

“I played basketball and baseball, but I obviously enjoyed baseball more,” Cheatham said. “As I got older, and the more I realized I was separating myself from other kids, I knew that’s what I wanted to do.”

He moved from Danville to Ardmore in 2019. He has moved around a lot with his father being a coach.

Cheatham, who has always been a pitcher, officially joined the Ardmore Tigers varsity baseball team in the spring of 2020.

“Last year, I felt like we had a lot better team, just overall. We had a lot more pitchers, and I think we had better hitting, too. It was unfortunate that the season got canceled, but we couldn't really do anything about it,” he said. “This year, overall, I thought it was pretty successful. Going in we didn't have a lot of confidence, but I knew in our area that we would at least make the playoffs.”

Ardmore did make it to the second round of the 2021 AHSAA baseball playoffs, where they were defeated by the Alexandria Valley Cubs two games out of three.

“I was still proud of how it ended,” he said. “I thought we had a pretty good season.”

Cheatham was one of two players on Ardmore — the other being first baseman Luke Hogan — who received an all-state selection by the Alabama Sports Writers Association for their play this season.

Cheatham was dominant on the mound this season. He faced 221 batters in 52 1/3 innings and had an ERA of 1.34. He allowed only 22 hits with 37 walks and 124 strikeouts, including a career-high 17-strikeout performance against the East Limestone Indians back on March 30.

The 6-foot-2-inch left-hander had an outstanding senior season on the hill, but he was becoming known to college coaches beginning in the 10th grade at Danville High School. His first scholarship offer came from Austin Peay State University before seven more offers came in.

Despite growing up in a state surrounded by Alabama Crimson Tide and Auburn Tigers fans, Cheatham grew up an MSU fan, so after receiving that offer, he pretty much committed to be a Bulldog on the spot back in July 2020.

“I have always wanted to go there since I grew up. I went on a visit a couple months before they offered me, and the facilities were amazing,” he said. “You can see with them playing in the super regionals the past few days, it's awesome out there. It's definitely an experience that I want to be at.”

Mississippi State baseball recently broke the NCAA attendance record for any three-game campus event for regular season or postseason baseball. Over that three-game span, they had a crowd of 40,140. The Bulldogs advanced to the College World Series in Omaha, Nebraska, after defeating Notre Dame in two-out-of-three games last weekend.

Cheatham plans to major in kinesiology.

“I think it will just help me further along my baseball career dealing with movements and help me stay healthy and better myself, really,” he said.Cheatham credits the success he has had on and off the baseball diamond, leading to becoming a student-athlete at MSU, in large part to his parents.

“Both of my parents have had a huge impact on me,” he said. “They both have been college athletes, and they know what it takes on the physical end and the mental level. They push me every day, and they mean a lot to me.”

Though he had only been at Ardmore High School for two years, he finds himself incredibly grateful for how close-knit the community is and the many events that they had.

Cheatham has three pitches that he throws, his favorite being the knuckle curve out of the two fastball grips (4-seam and 2-seam) and a changeup. He's not learning any new pitches at the moment, but he looks forward to moving to Starkville, Mississippi, in July, starting college and potentially adding new pitches to his repertoire.

“I'm sure we're going to try and develop some pitches when I get to college,” he said. “(I'm looking forward to) just the new experiences, meeting new people, and I think overall it'll be a good time.”

As for what he hopes to accomplish his freshman season, based on what coaches have told him, he believes he can make a difference.

“They have a bunch of people graduating, so I think I can have a good impact soon,” Cheatham said. “Obviously, I want to have an impact, get out there as soon as I can to help the team.”

Mississippi State will face off against the Texas Longhorns Sunday at 6 p.m. on ESPN 2.

“I think they've got a good chance,” he said. “It's not great that they got paired with the second-best team, but I believe that they have a good shot.”