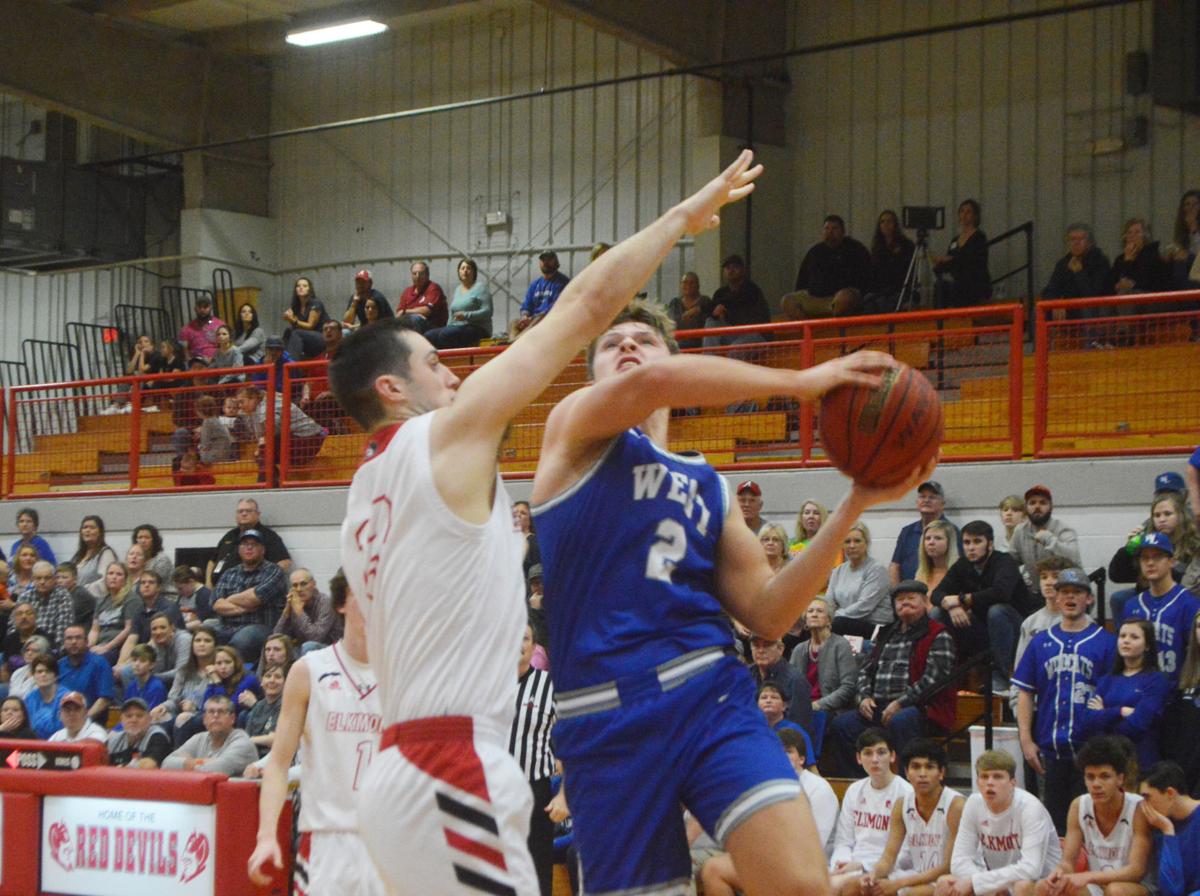 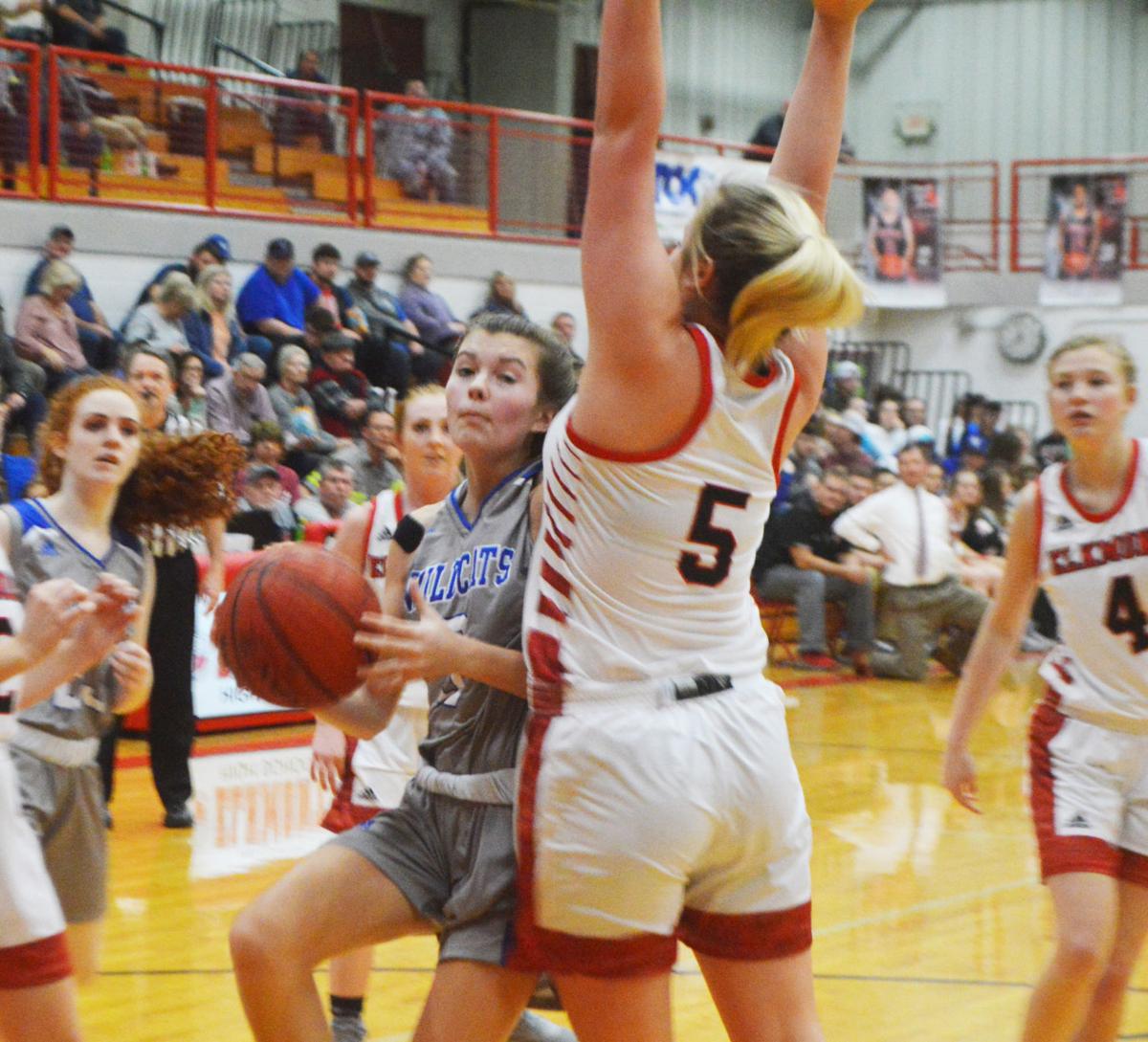 West Limestone's Carlie Belle Winter is fouled by Elkmont's Emeril Hand (5) as she drives to the basket Tuesday night. Winter scored 22 points in the Wildcats' 54-49 victory.

West Limestone's Carlie Belle Winter is fouled by Elkmont's Emeril Hand (5) as she drives to the basket Tuesday night. Winter scored 22 points in the Wildcats' 54-49 victory.

Branson Owens is not the biggest or strongest player on the West Limestone basketball team. Not by a long shot. He also doesn't score very many points. But he helps lead the team in two other important categories — floor burns and all-out effort.

It was that effort that helped West take a huge Class 4A, Area 15 victory Tuesday night over Elkmont. Owens had three fourth-quarter steals that led to baskets and allowed the Wildcats to pull away for an eventual 47-42 victory over the Red Devils.

“He's just a tough son of a gun, man,” West Limestone coach Justin Taylor said of Owens. “He's the one that brought us back in that (subregional) game at Deshler last year when it was over. Same thing, a bunch of steals that led to points. He's just not going to go away. You wouldn't want to fight Branson. You might whip him, but it would take you all day to do it.”

The victory not only avenged a 36-34 loss to Elkmont three weeks ago, it also clinched the regular-season area championship for the Wildcats, which means they not only will host the area tournament but are guaranteed a spot in the subregional round. The top two finishing teams in each area tournament advance to subregionals, and since there are only three teams in Area 15, West automatically advances to the championship game. Brooks and Elkmont will play in a semifinal to determine who continues and who concludes their season.

“There's no better feeling than on that Tuesday night the first week of February sitting back and eating popcorn while two other teams play to see who goes home, and you know you're not going home,” Taylor said. “Hosting is big, but in this three-team area, finishing first is huge because you know you're going to advance to the sub-regional.”

Owens helped make it happen for the Wildcats. With West holding a slim 33-30 lead with less than six minutes remaining in the fourth quarter, Owens stole the ball which led to a 3-pointer by River Helms. A few minutes later, after Elkmont cut the lead to four points again, Owens had steals on back-to-back possessions that turned into fast-break layups, the first one by Helms and the second by Camryn Williams, which put West up 44-36 and basically sealed the win.

“I just play as hard as I can, and everybody else tries to join in,” Owens said. “Everybody tries to play as hard as they can on defense. We take pride in our defense. If the other team doesn't score, they can't win.”

West finished its area season with a 3-1 record and now sits at 9-9 overall. The Wildcats struggled early in the season, but Taylor said the team has improved greatly. They head into the Limestone County Tournament next week.

“Early in the season we were losing some games and the kids thought it was the end of the world,” Taylor said. “At 15 to 16 years old, you don't have the ability to see the big picture. I told them this is as far as they've been in their lives, but I've seen this act over and over and over. We're a team that keeps plugging along and gets better everyday and gives themselves a chance, because we're so close to being really good.”

The Wildcats led 33-23 at halftime and 40-32 after three quarters, but Elkmont came storming back in the second half in an attempt to pick up their first area victory of the season.

West still led 46-37 with 4:15 remaining, but Elkmont's Tylee Thomas hit a jumper and a 3-pointer while Emeril Hand added a basket to cut the Wildcats lead to two points with 2:19 remaining.

After a basket by Cassidy Winter gave West a four-point advantage, Thomas hit another 3-pointer with 1:15 remaining to cut the lead to 48-47.

The two teams traded baskets and Carlie Belle Winter hit a free throw with 19.1 seconds left to put West up 51-49. Elkmont had a chance to tie the game but missed a basket on their next possession. West Limestone's Faith Craig then made one free throw to put the Wildcats up three points, giving Elkmont another chance to tie, but a 3-pointer with 4 seconds left missed. Sarah Rose grabbed the rebound and was fouled with 1.4 seconds remaining. She hit two free throws to finally seal the victory.