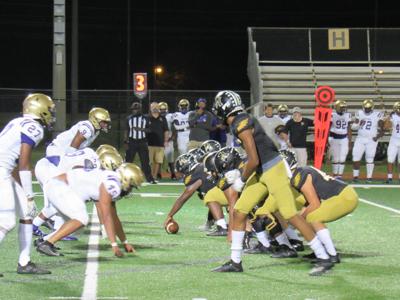 Coming off a loss on the final play to Muscle Shoals last week, the Athens Golden Eagles knew they were in for another tough matchup against Hueytown Friday night. The contest was close throughout, with the biggest lead of the game only 15 points. Unlike last week, however, this time Athens was able to make some big plays and come away with a 49-40 non-region victory.

“That was a heartbreaker we lost last week,” said head coach Cody Gross. “We couldn't get a first down at the end of the game when we might have iced it. Here we were able to finish it, overcome a penalty and everything. I couldn't be more proud of our players.”

Hueytown got the ball to begin the contest and drove down to the Golden Eagles' side of the field, but the Athens defense was able to force a turnover on downs at the AHS 22-yard line. That stop, along with touchdowns just before and after halftime, likely ended up making the difference in the outcome of the game.

“That stop was huge,” Gross said. “Going into this game I was thinking any time we could stop these dudes will be a good deal. I think everybody in the stadium held their breath every time (Hueytown) snapped the ball.”

Athens wasted no time getting on the scoreboard after the change of possession. On the Golden Eagles' first snap of the game quarterback Jordan Scott dropped back for a throw, moved up in the pocket to avoid pressure and floated a touch pass down the field that hit receiver Avonte Thompson in stride. Thompson was able to outrun the coverage to the end zone for a 78-yard touchdown. The point after made it 7-0 Athens just over two minutes into the contest.

The Golden Gophers would score on a 7-yard run to tie the game at 7-7 two minutes later, but the Golden Eagles answered when running back Jaylen Gilbert made his first of four touchdown runs on the night, the first coming from 41 yards out, with 6:07 remaining in the first quarter.

“Our offensive line played great other than a couple of lapses, and Jaylen Gilbert is a heck of a running back,” Gross said.

Hueytown had one more chance to score in the opening period. The Golden Gophers moved the ball down to the Athens 20-yard line, but the Golden Eagles forced a field goal try that sailed wide right.

Hueytown managed to tie the game again with a 33-yard touchdown pass on the first play of the second quarter.

Athens was forced to punt on its next possession, but pressure by the Golden Eagles' defense on the Golden Gophers' quarterback led to a floated pass that was picked off by Jack Tregoning.

The turnover gave Athens possession at the Hueytown 15-yard line, and the Golden Eagles capitalized when Gilbert punched the ball in from 3 yards out to put AHS back on top 21-14 after the PAT.

The Golden Gophers tied the contest up once again on a 22-yard run with 4:55 left before halftime, but a 65-yard run and score by Gilbert on Athens' next offensive play put the Golden Eagles back on top.

Hueytown scored again on a 20-yard run, but this time the point after was blocked, so Athens remained ahead 28-27 with 1:16 remaining before the break.

Athens quickly worked its way down the field on the ensuing possession but was faced with a fourth and 10 from the Golden Gophers' 31-yard line. Scott bought time in the backfield before throwing a pass to Dylan Roper. Roper was able to stop his stride, come back towards the ball and make the catch before fighting off a Hueytown defender to cross the goal line for a touchdown.

The point after was good, giving Athens a 35-27 advantage it took into the locker room at halftime.

“Jordan is a ballplayer,” Gross said. “He makes plays.”

Gross also commended Roper for his efforts on the play.

Gilbert gave the Golden Eagles their biggest lead of the night at 42-27 on a 19-yard touchdown run with 7:48 left in the third quarter, but that lead was short-lived.

The Golden Gophers answered on their next play with a 66-yard touchdown pass that narrowed the gap to 42-34.

The Golden Eagles looked to have put points on the board again early in the fourth quarter on a run by Gilbert, but a disputed penalty for too many players on the line of scrimmage negated the play and forced Athens to try a field goal. The snap and hold did not go correctly, leading to an incomplete pass that gave Hueytown possession at the Golden Eagles' 21-yard line.

The Golden Gophers once again hit a home run with a 79-yard touchdown pass that left Athens' lead at only 42-40 after a failed conversion with 8:28 left to play.

The Golden Eagles kept the ball on the ground during their next possession in an effort to kill the remaining clock.

“I didn't want them to get it back,” Gross said. “They are an explosive group.”

Athens managed to get the ball into the red zone but ended up throwing an incompletion on fourth and goal. However, a pass interference penalty gave AHS another chance from the 2-yard line.

This time Scott scrambled right and punched the ball in to put the Golden Eagles up 49-40 with just 1:42 remaining in the game.

A tipped pass during Hueytown's next drive led to an interception by Zach Harries that iced the game for Athens.

With the win Athens moves to 3-2 overall. The Golden Eagles will return to Class 6A, region 8 play next week when they host Hartselle.