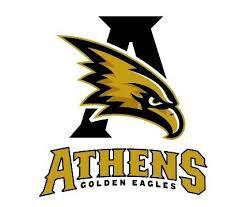 Athens might have pitched a shutout Friday night against Hazel Green, but that doesn't mean Golden Eagles coach Cody Gross was happy with his team's performance.

After opening the game with two consecutive touchdowns, Athens' offense sputtered through most of the remainder of the game, only scoring one additional time in a 22-0 win over the Trojans.

“We held them out (of the end zone), but I wouldn't say we played very good, though,” Gross said. “We made way too many mistakes. We've definitely got to play a lot better than we did (Friday) if we want to challenge in the region.”

The game started out well for Athens, with quarterback Jordan Scott throwing two first-quarter touchdown passes. The first was a 24-yard scoring strike to Avonte Thompson to cap the Golden Eagles' first possession. Scott added the 2-point conversion with a pass to Bryant Grisham.

Athens extended the lead to 15-0 later in the first quarter on Scott's 8-yard scoring pass to Shelomoh Trotman and Heath Carden's extra point.

Athens had a chance to extend the lead even farther on its next possession, but fumbled the ball inside Hazel Green's 10-yard line to end that possession.

Hazel Green moved the ball up and down the field much of the game, but Athens' defense was able to bow up and keep the Trojans from scoring.

Hazel Green drove inside Athens territory four different times, but were turned back each time, three times on downs and a fourth when the first half expired.

Athens was finally able to put the game away early in the fourth quarter when Scott threw a 28-yard touchdown pass to Dylan Roper.

“In the second half, we were just sloppy,” Gross said. “Really the whole game we were sloppy. We were not doing the little things right and it cost us. The biggest thing is we're not paying attention to detail.”

The toughest part of Athens' schedule is ahead of them, beginning with Friday's game at Muscle Shoals, and Gross said the Golden Eagles need to improve greatly in order to pick up some more wins.

“It's a lot of the same stuff we've talked about and worked on cleaning up from earlier in the year,” Gross said. “Some of things things we didn't get fixed. If we don't get them fixed this week and in the coming weeks, we're not going to be very happy. The rest of the year, we'll be playing folks where you have to do the little things right.”