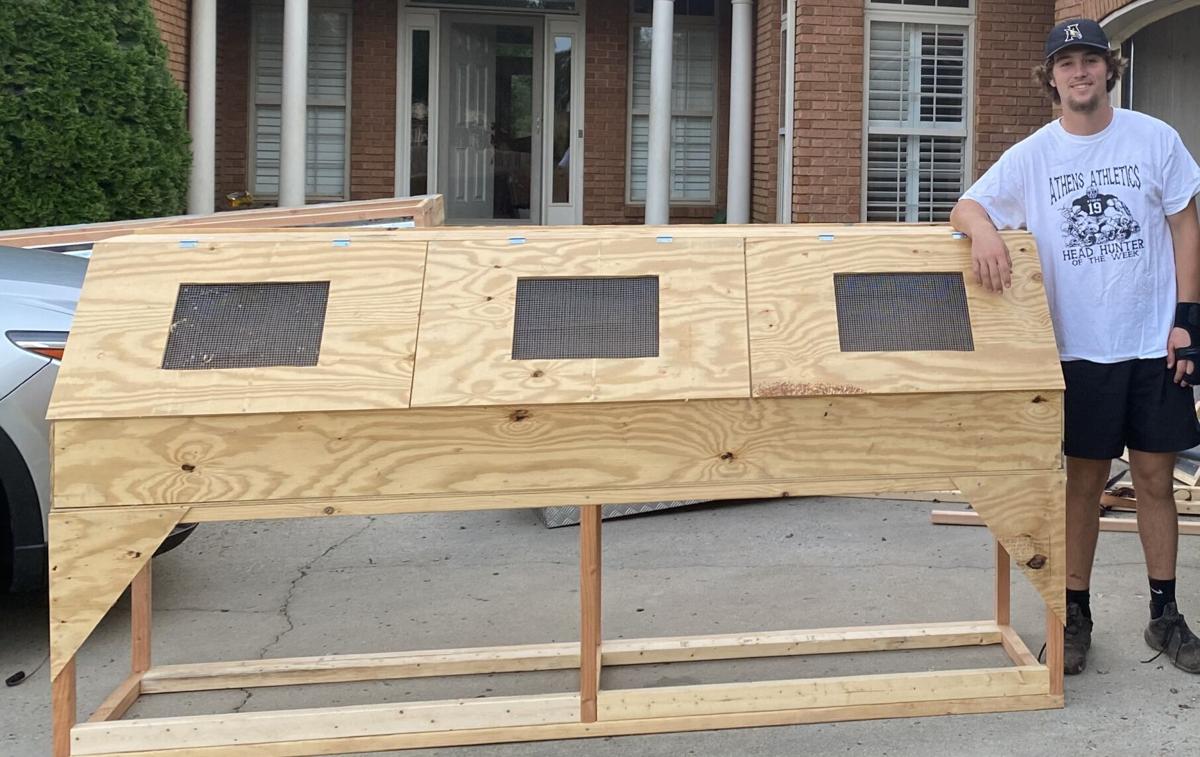 Athens senior Jack Tregoning stands next to one of many pieces he has built. Building things is one of many hobbies he has that not only includes sports, but also music and raising animals. 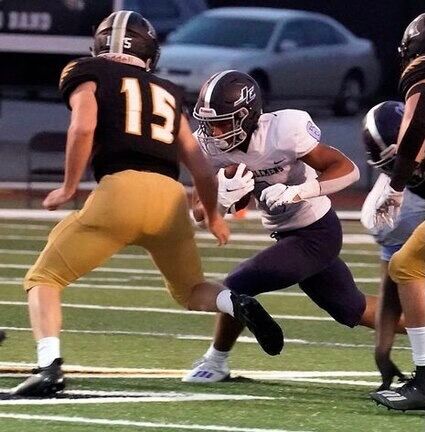 Athens linebacker and senior Jack Tregoning goes in to make a tackle against the James Clemens Jets during the 2020 season.

Athens senior Jack Tregoning stands next to one of many pieces he has built. Building things is one of many hobbies he has that not only includes sports, but also music and raising animals.

Athens linebacker and senior Jack Tregoning goes in to make a tackle against the James Clemens Jets during the 2020 season.

Athens senior Jack Tregoning has always been a football player, a pretty good one at that. Last season in his junior year, he earned All-State second team honors after he recorded a total of 143 tackles and had 24 tackles in one game against James Clemens. But Tregoning is much more than that.

He's a builder, a track and field shot put standout with a third place finish at state in 2020, a musician and he raises animals. All of that makes him much more than your typical high school student.

Tregoning, 18, soon to be 19, was born and raised in Athens as an only child and has been taking classes online at Athens Renaissance ever since he completed his freshman year at Athens High School.

“My mom told me 'you need to go try high school and see how it feels.' I tried it and I liked it, but I just started doing so much at home,” he said. “That's mainly the reason, just so I can work and it's easier to fit in my schedule.”

Football is a large part of the work he has, and it's something he took a liking to early on in his life.

“(Football) is just a different sport. It's a legal street fight,” he said. “I have always played in the yard ever since I could pick up a football. They had little league, and I have been playing for over 10 years.”

His love for the game came from his dad, who was coach when he was a kid.

“Once school ball started, I always thought I was going to be a quarterback, but in middle school I moved over to middle linebacker,” Tregoning said.

It's a position on the field he takes pride in and one that led him into taking a leadership role in the middle of the defense.

“I'm not super vocal. I like to lead more by example,” he said. “I'll just go up to a guy and kind of talk to him. I don't really lead by just going and yelling at everybody all the time, I just try to make it more of a one-on-one relationship to help pick up guys.”

At the moment, his leadership role is coming from the sidelines, as he has been injured and unable to play in any games so far after breaking a finger in the jamboree football game against Florence back in August.

“I'd like to make first team All-State this season, but it'll be tricky since I have missed the first few games already,” Tregoning said. “But I'd also like to coach up the other linebacker (Michael Mills) that I play with and get him to All-State.”

Tregoning hopes to be back on the field sooner rather than later, but so far, he has been impressed by his teammates and the positions the coaches have put the team in.

“I'm like the dude on defense, so it has been pretty rough being out, especially against Fort Payne,” he said. “But those guys really picked up and all did a really good job.”

Athens rallied and had a comeback win of 41-40 in Week 1 of the high school football season.

He understands what comes with being a standout senior athlete. He said he has had colleges and universities reach out to see if he has interest in continuing playing football or track in college, but he hasn't given it one thought. At least not yet.

“I have just had a few calls from smaller schools like Birmingham Southern College, Harding University over in Searcy, Arkansas, and the University of West Georgia,” he said. “But I'm not 100% sure what I want to do, whether it's shot put or football. I'm hoping to figure everything out after football season, but right now, I'm just worried about Athens High School football.”

Sports won't be his only interest in the coming years. He has options to choose from in his pursuit of becoming a successful entrepreneur. Although sports and football were his first love, animals are a close second.

“Ever since I was a little kid, I was just always messing with animals, whether it be a baby bird that fell out of its nest in the backyard or me catching lizards,” Tregoning said. “It just started with some baby chicks that I bought at Tractor Supply in the springtime, but then I thought 'maybe I'll get a few ducks,' and then I thought 'why not add some quail?'”

It didn't stop there for Tregoning, as he then added some peacocks, chickens and even added some emus. And yes, he does have one black lab.

“I spend about two or three hours a week taking care of them (birds) and giving them water and another hour cleaning and stuff like that,” he said. “I also got a whole bunch of automatic feeders.”

Caring for his birds has also led to a source of income for Tregoning. He builds bird cages and sells them on his Facebook page. According to Trgeoning, they sell for around $100-$350.

“All my business is typically done through Facebook,” he said. “It's just listed under my name, Jack Tregoning.”

Tregoning doesn’t just build things he intends to sell — a lot of it is for fun.

“If I need something at the house like a gun rack or something to hang my hats on, I'll build it,” he said. “I have learned to build everything from YouTube. It's all you need.”

Because of his many interests and his entrepreneurial desire, Tregoning is undecided about what his major will be in college, but his experience has led him to believe he'll have plenty of options.

“I like the birds and stuff, it's a nice little side gig, but I'd like to take it a step further whether it be farming or something else that I find interesting like building and music,” he said.

His interest in music not only includes playing guitar and the drums, he also writes country songs. He acknowledges that he he has thought about going to Nashville, Tennessee, someday, which is regarded as Music City USA.

Throughout his life, with his many interests and hobbies, Athens head football coach Cody Gross and inside linebackers coach Steve Carter have stood out as mentors for him not just on the field but off the field as well.

“They're just both great dudes and they always set a good example just in everything that they do,” Tregoning said. “Some kids don't always have a father figure. I'm blessed with two great parents, but if you look up to them two dudes (Gross and Carter), you're going to be all right.”

As for what advice Tregoning has for the younger guys coming up in the Athens football program, it is to never miss a practice.

“Don't miss a day and always give 100%.,” he said. “The biggest thing is just being here and working at it every day, and that's how you get better.”