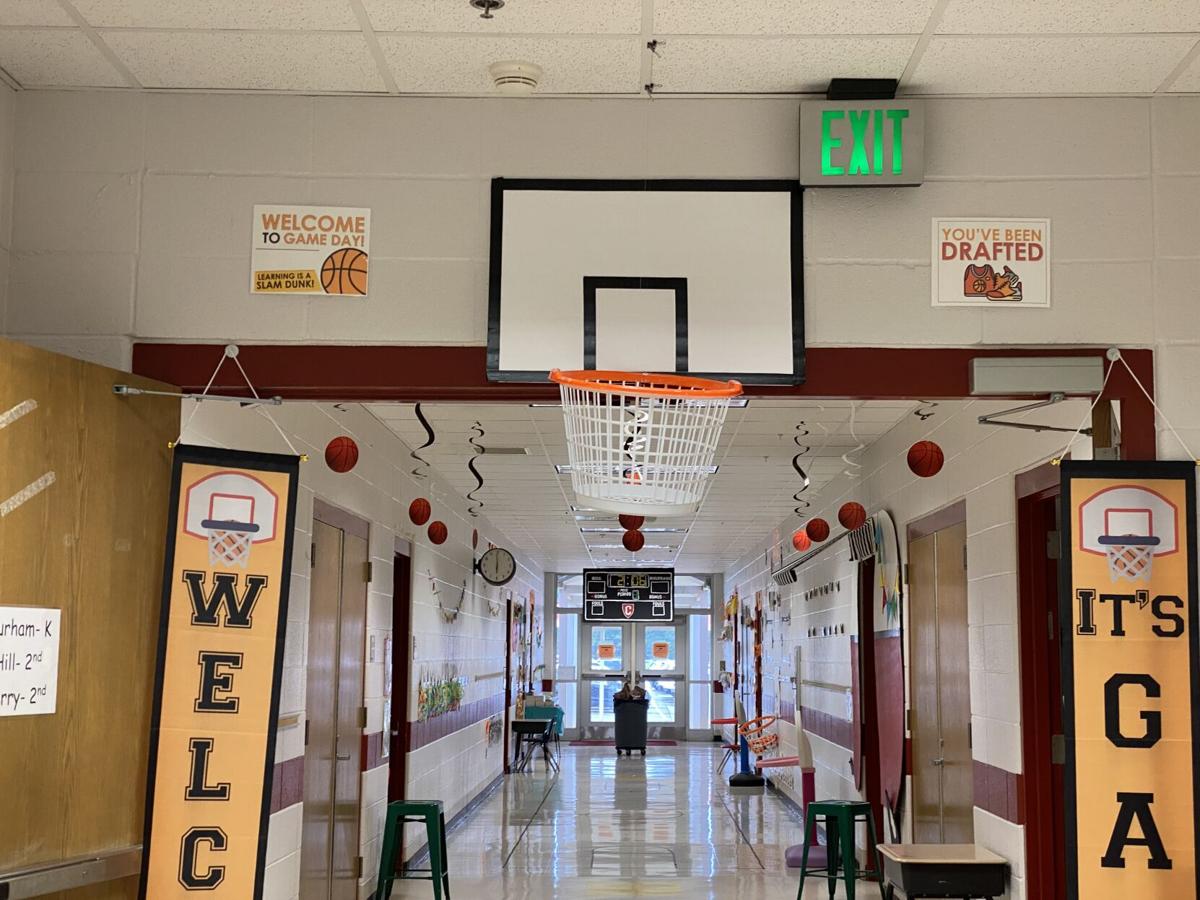 Creekside Elementary decorated its hallways and classrooms with a theme of the NCAA Basketball Tournament and is using NCAA Men’s Tournament brackets as a way to learn and have fun. 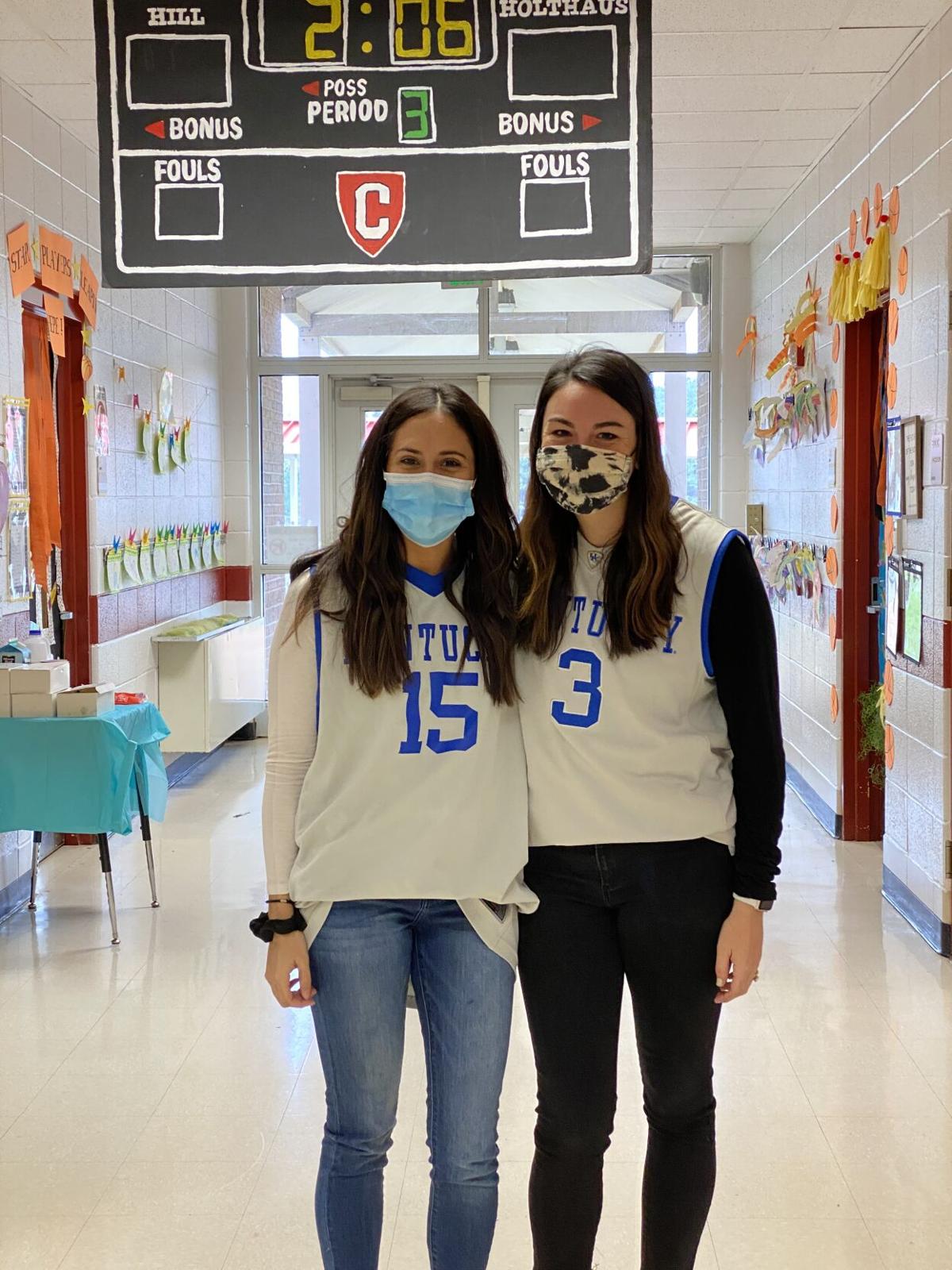 Second grade teachers Jordan Hill (left) and Lindsey Fryman (right) pose for a photo in one of the decorated hallways on Tuesday at Creekside Elementary School.

Originally supposed to start last year before the coronavirus pandemic, Creekside Elementary in Harvest came up with the idea of using NCAA Tournament brackets as a way to get kids involved, have fun and be more engaged with the lessons.

“Some of the teachers have done some really fun things like putting courts up in the classroom and little goals in the classroom,” Creekside Primary School principal Matt Scott said.

Second-grade teacher Lindsey Fryman is one of those teachers, and she said she has found the idea has resonated with the students and they’re having fun.

“It’s an opportunity to have fun with it being perfect timing right before spring break,” Fryman said. “I have found the decorations and dressing up is really fun and kind of pulls them in and holds their engagement, and we’re able to transfer that to the material.”

With spring break coming up, she understands kids’ excitement to get a week off from school and maybe being tuned out, but bringing the NCAA Tournament idea to life has certainly made a difference.

“Right before spring break, we’ve got to get that push, and the kids have been so engaged. The rigor is really high,” Fryman said. “It’s just important for them to have fun and know that they have adults in this school that want to make their education fun.”

Just outside of Fryman’s classroom, there is a book bracket that she admits the kids have had a lot of fun with.

“Instead of actual basketball teams, they’re making picks on books. We started the bracket a couple weeks ago, and it’s whoever is reading the story to them is who they usually pick,” she said. “So, Mr. Scott recorded ‘Salt in His Shoes’ for us, and that book ended up winning, and one day Oprah read a book online, and so of course they picked that one.”

Scott has been in education for 25 years, now in his 17th year as principal at Creekside, and he said he loves it.

“I have been able to grow up here and watch kids learn and grow every day. It has been the best place I have ever been,” he said. “I got to be dad and principal here. My kids got to come to school with me, and now it’s great, because some of our former students that I had when I first became principal, now their kids are coming to school here.”

Last year, right before the coronavirus pandemic, teachers had hallways decorated, a scoreboard hanging up and even had Final Four matchups with some reading books. But this year, with kids back in classrooms and with the vaccine rollout, they were finally able to bring “March Madness to Creekside.”

“The teachers were able to save a lot of the lesson plans, a lot of activities from last year, and it’s fun for our kids,” Scott said. “The week before spring break is always a fun week anyway, and this just adds to the excitement. That’s what kids deserve is to get to come to school and have fun, learn and learn in a fun way.”

Along with the book brackets, students in third through fifth grades have filled out NCAA Tournament brackets with their PE coaches and had a blast, according to Scott.

“I think some of the kids are making some of the picks based on the mascot, team colors or what the uniform looks like,” Scott said. “I’m sure a lot of them are influenced by their dad or by their teacher. Our library has a lot of good books on basketball or basketball superstars, and they’re becoming interested in that as well.”

The learning objectives for the students have been helping with math and reading. The lessons have included learning games, problems to solve, books and passages to read, and to Scott, that has made “our kids the real winners.”

“We want to create an excitement for our kids, so the teachers are doing a really good job creating centers where they can work together, and they’re getting more engagement in whatever their lesson is,” Scott said. “We’re tying it into a real-life experience, which then makes them more excited when they actually get down and start doing the lesson.”