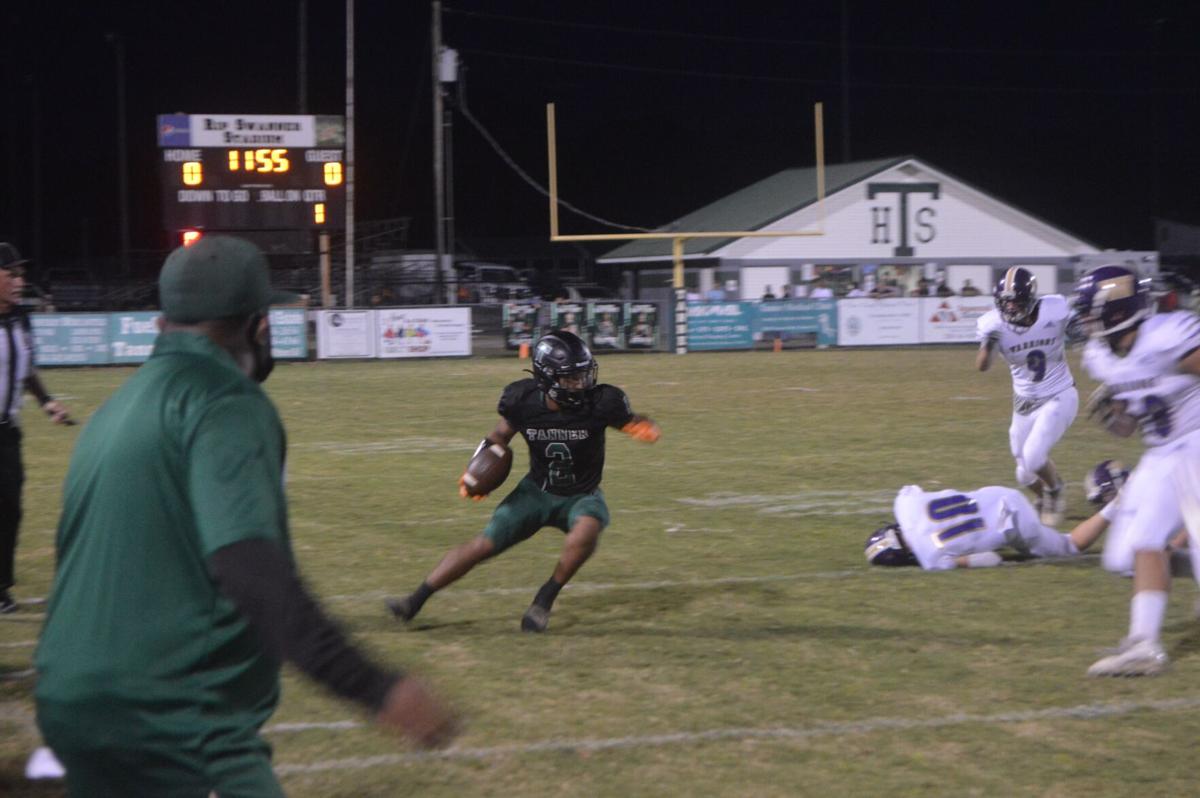 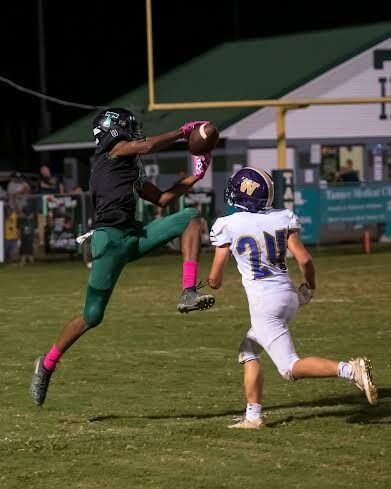 Tanner Rattlers receiver Skylar Townsend goes up over the defender to make the catch in the macthup against the Whitesburg Christian Warriors Friday night at Tanner High School.

Tanner Rattlers receiver Skylar Townsend goes up over the defender to make the catch in the macthup against the Whitesburg Christian Warriors Friday night at Tanner High School.

A strong run game and a dominant defense led the Tanner Rattlers to a 48-12 win over the Whitesburg Christian Warriors Friday night at Tanner High School. The Rattlers record now moves to 5-2 on the season and 4-0 in 2A Region 7.

The Rattlers got on the board on their first possession of the game after the opening kickoff. Senior Trey Crutcher found the end zone for a 2-yard rushing touchdown on a direct snap. The PAT was successful making it 7-0 with 9:06 remaining in the first quarter.

Tanner went up 13-0 near the end of the first quarter when senior Alex Guster rushed for a 35-yard touchdown. This game after a big gain from Crutcher on the ground to the Warriors side of the field.

Tanner's opening drive of the second quarter would have ended in another rushing touchdown by Crutcher, but a holding call brought his 22-yard touchdown run.

Whitesburg Christian responded with a big play on a 81-yard touchdown pass to wide receiver Isaiah Mathews. After the missed PAT, Tanner's lead shrunk to 13-6. But getting near the end zone for the Warriors was few and far between with big plays from Darrell Howard, K.C. Hale, Jakeem Fletcher, Lawson Johnson and the rest of the Rattlers defense.

The Rattlers offense had much success on the ground throughout the night, making the passing game less of a factor. But with the Warriors defense predominately playing for the run, Tanner's quarterback Karl Parham took advantage and found Ellineaus Jackson for the 18-yard touchdown pass to go up 19-6. Parham connected on his second touchdown pass of the game in their very next drive, this time finding wide receiver Skylar Townsend for a 37-yard touchdown pass to end the first half with a 25-6 lead.

Whitesburg Christian opened with the ball to start the third quarter and that was quickly stifled with a sack on third down by Johnson.

The Rattlers got the ball back and it didn't take long for Crutcher to once again find the end zone as he rushed for a 55-yard touchdown run. After the converted PAT, the Rattlers held a 32-6 advantage.

That was the first of 23 unanswered points in the third quarter by Tanner's offense.

Quarterback Ga'Kobey Gill got some playing time at quarterback for the Rattlers and found the 6-2 Townsend on a highly contested deep ball that he was able to come down with. That set up a 10-yard rushing touchdown by Jackson, his second score of the game. The two-point conversion was successful, bringing the score to 40-6.

Guster took it the house for the second time with a 36 yard touchdown run late in the third quarter. At the end of the third, Tanner held a commanding 48-6 lead.

The Warriors did find the end zone once more late in the fourth quarter on a 48-yard touchdown pass to wide receiver Brayson McNeill. It was a running clock throughout much of the fourth quarter, ending the game with a fifth consecutive victory for the Rattlers.

Tanner will be back at home Friday against the Falkville Blue Devils (4-2) beginning at 7 p.m.