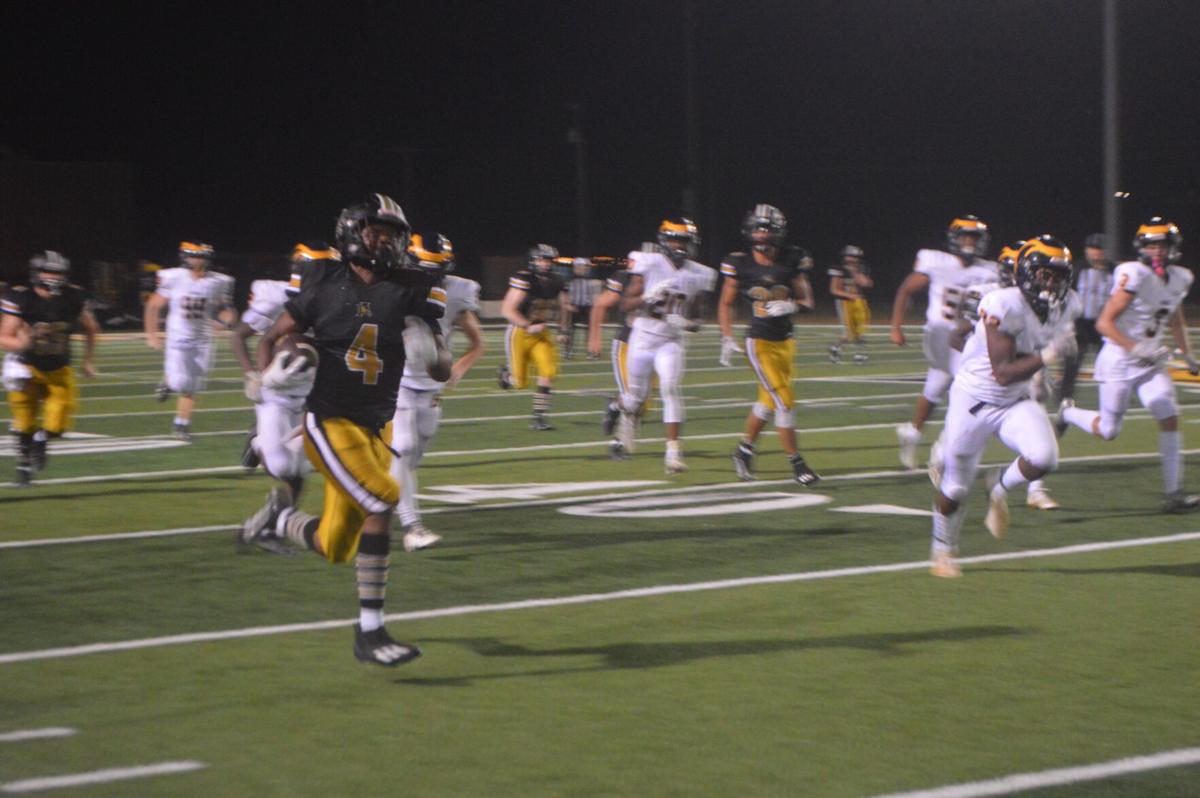 Athens running back Kameron Gatewood runs past the Bucks defenders down the sideline in Friday night's matchup against Buckhorn at Athens Stadium. 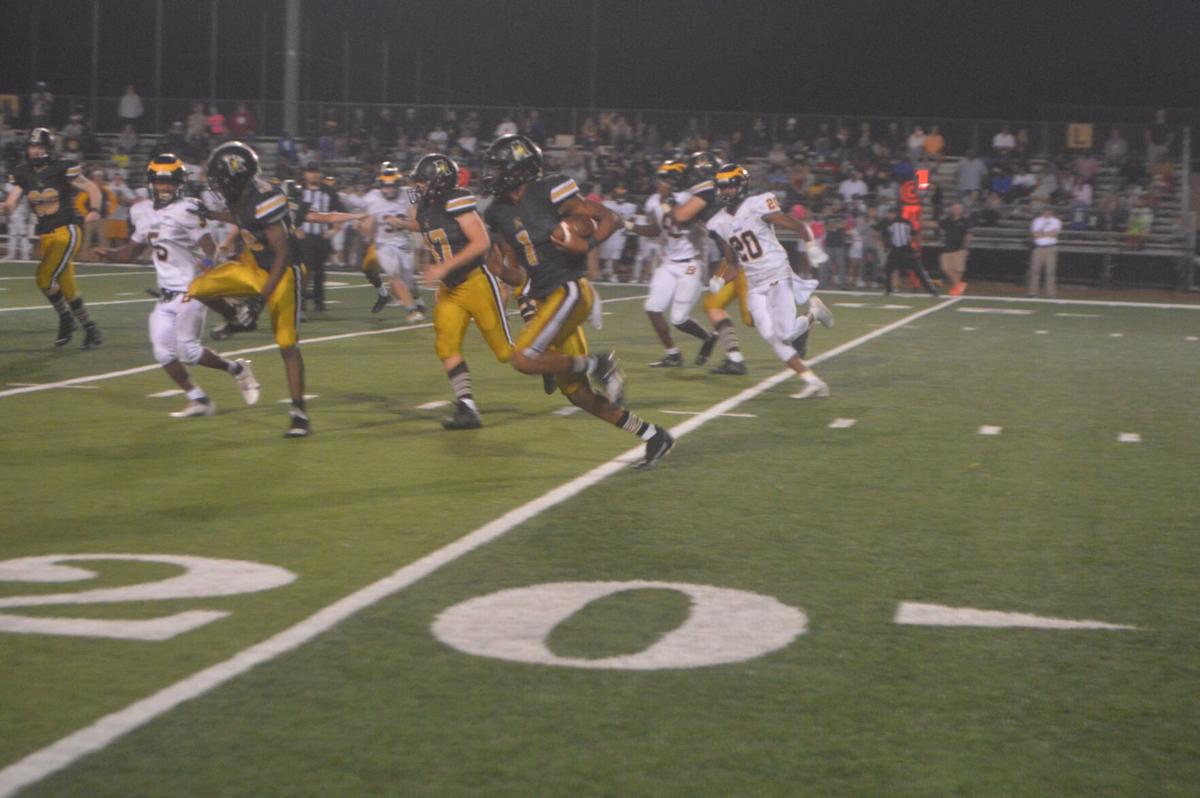 Athens senior quarterback Jaden Jude takes the quarterback keeper and runs to the left side in the region matchup against the Buckhorn Bucks Friday night at Athens Stadium. 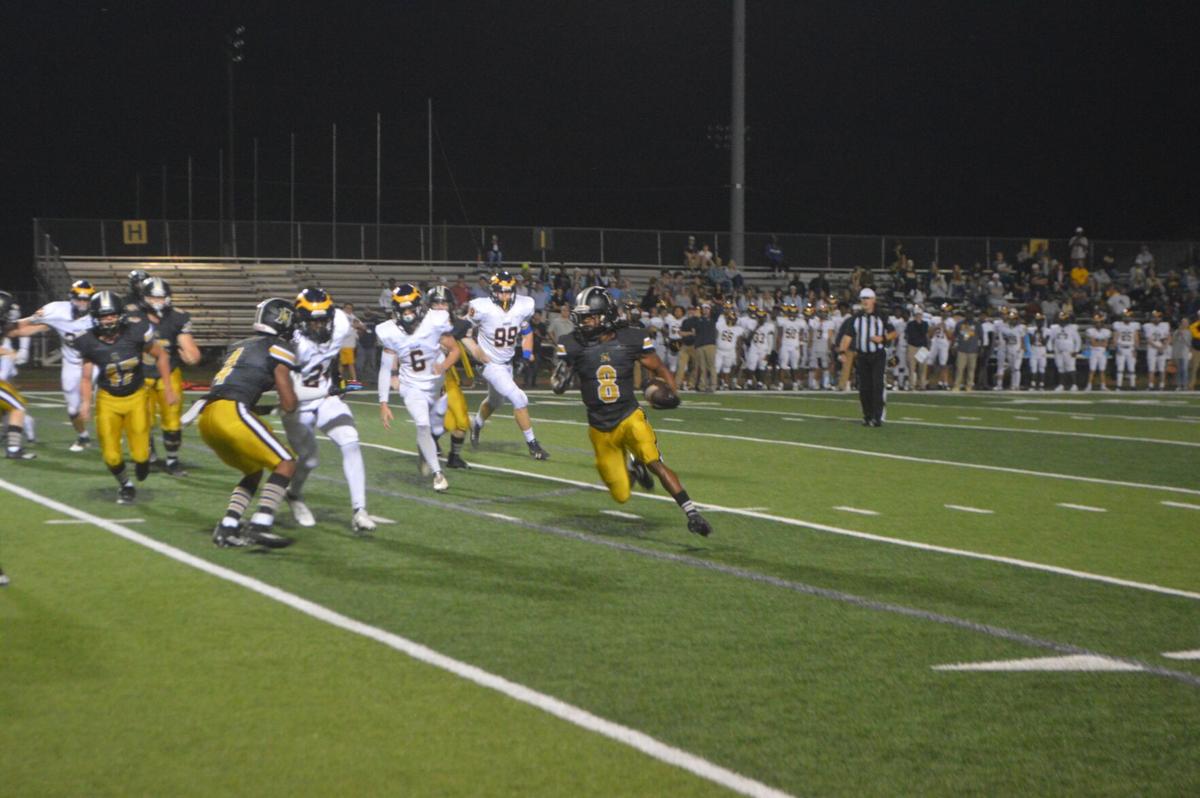 Athens junior Larry Howard takes the pitch to the corner of the end zone for a 5 yard touchdown early on in the first quarter in the matchup against Buckhorn Friday night at Athens Stadium.

Athens running back Kameron Gatewood runs past the Bucks defenders down the sideline in Friday night's matchup against Buckhorn at Athens Stadium.

Athens senior quarterback Jaden Jude takes the quarterback keeper and runs to the left side in the region matchup against the Buckhorn Bucks Friday night at Athens Stadium.

Athens junior Larry Howard takes the pitch to the corner of the end zone for a 5 yard touchdown early on in the first quarter in the matchup against Buckhorn Friday night at Athens Stadium.

Four lead changes in the fourth quarter, the last one coming on a late touchdown by Athens with under six minutes remaining in the game led to a 27-24 victory for the Golden Eagles over the Buckhorn Bucks Friday night at Athens Stadium.

After the first two drives by both offenses stalled, Athens offense got things going on their third offensive possession. Senior quarterback Jaden Jude found senior Dylan Roper for a 39-yard pass completion down their opponent's 5-yard line. On the very next play, junior Larry Howard took the pitch on the reverse for a 5 yard touchdown run with 4:13 remaining in the first quarter. Sophomore kicker Nelson Brown converted the extra point to put Athens up 7-0.

The score would remain 7-0 midway through the second quarter until Buckhorn senior running back Terrence Robinson took the direct snap for a 2-yard rushing touchdown. At the the end of the first half, it was all tied up at 7-7.

After a quick three-and-out by the Bucks offense to begin the second half, Athens running back Kameron Gatewood took the handoff on the first play of the drive into the end zone for a 55-yard rushing touchdown.

With just over a minute remaining in the third, Buckhorn's Van Reid converted on a 31-yard field goal to trim the Athens lead to 14-10 heading into the fourth quarter.

Buckhorn got the ball back early in the fourth and were able to take their first lead of the game after Robinson took the hand off for a 15 yard score to go up 17-14 with 10:30 left in the game.

Roper took the ensuing kickoff by Buckhorn to the house on a 95-yard kickoff return for a touchdown to retake the lead, or so they thought. A personal foul penalty on Athens negated the score, pinning the Golden Eagles offense back at their own 21-yard line.

A long methodical drive by the Athens offense got them to the Bucks side of the field. Gatewood had a 10-yard run from the 43 to the 33 yard line that was followed by a personal foul penalty by the Bucks defense. Jude, who is primarily at quarterback, was spread out wide at the receiver position on the next play.

Standing at 6-feet, 4-inches tall over the 5-foot, 8-inch Buckhorn cornerback Tyrence Crutcher, Athens clearly saw an advantage. Sophomore quarterback Brogan Gross saw the mismatch and threw up a fade for Jude to come down with it, but the Bucks were called for pass interference. Now from the 14-yard line, Athens went right back to the same play, this time with Gross finding Roper in the back corner of the end zone for a 14 yard touchdown pass. The PAT was blocked, giving Athens the lead back at 20-17.

Less than a minute later, Buckhorn's offense responded with a 70-yard rushing touchdown by senior Tavian Moore. The extra point was good, giving the Bucks a 24-20 lead with 6:34 left in the contest.

More costly penalties by Buckhorn, including a sideline infraction followed by a kickoff out of bounds, gave Athens great field position. Beginning from their opponent's 45-yard line, Gatewood took the hand off on first down and lost a yard. On the next play, Gatewood found a hole in the defense and ran it in from 45 yards out for his second rushing touchdown of the game. With 5:39 left, Athens held a 27-24 lead.

The Bucks began the drive on their own 9-yard line. Athens defense stuffed them on three straight plays that brought out the punting unit. On fourth down from their own 13 yard line, Buckhorn's Tyler Zawicki faked the punt and ran it for a 35 yard gain. Buckhorn got it down to the Athens' 31-yard line with less than two minutes to go. After a quarterback keeper and two consecutive incomplete passes by senior quarterback CJ Hatcher, it was fourth down.

With the homecoming crowd yelling at the top of the lungs and players on the sideline pumping up the crowd to make noise, Hatcher threw a pass to the end zone that was broken up by Athens senior Shelomoh Trotman. That pass breakup sealed the victory for Athens. With no timeouts left on the Buckhorn sideline, Jude took a knee to run out the clock and give Athens their fourth win of the season.

“The thing I'm proud of is we found a way,” Athens head football coach Cody Gross said. “Some guys made some plays, guys stepped in and we had some resilience. I'm proud of that.”

Gross acknowledged that he didn't feel his team was ready to play, which was out of character for them during homecoming weeks. But the big plays mattered.

“Gatewood had a couple big runs for us, Jude did a good job of reading a triple option play at the end that allowed Gatewood to take it to the house,” Gross said. “Brogan stepped in there and made a good throw to Roper, who made an unbelievable catch early in the fourth quarter. Like I said, guys just made plays.”