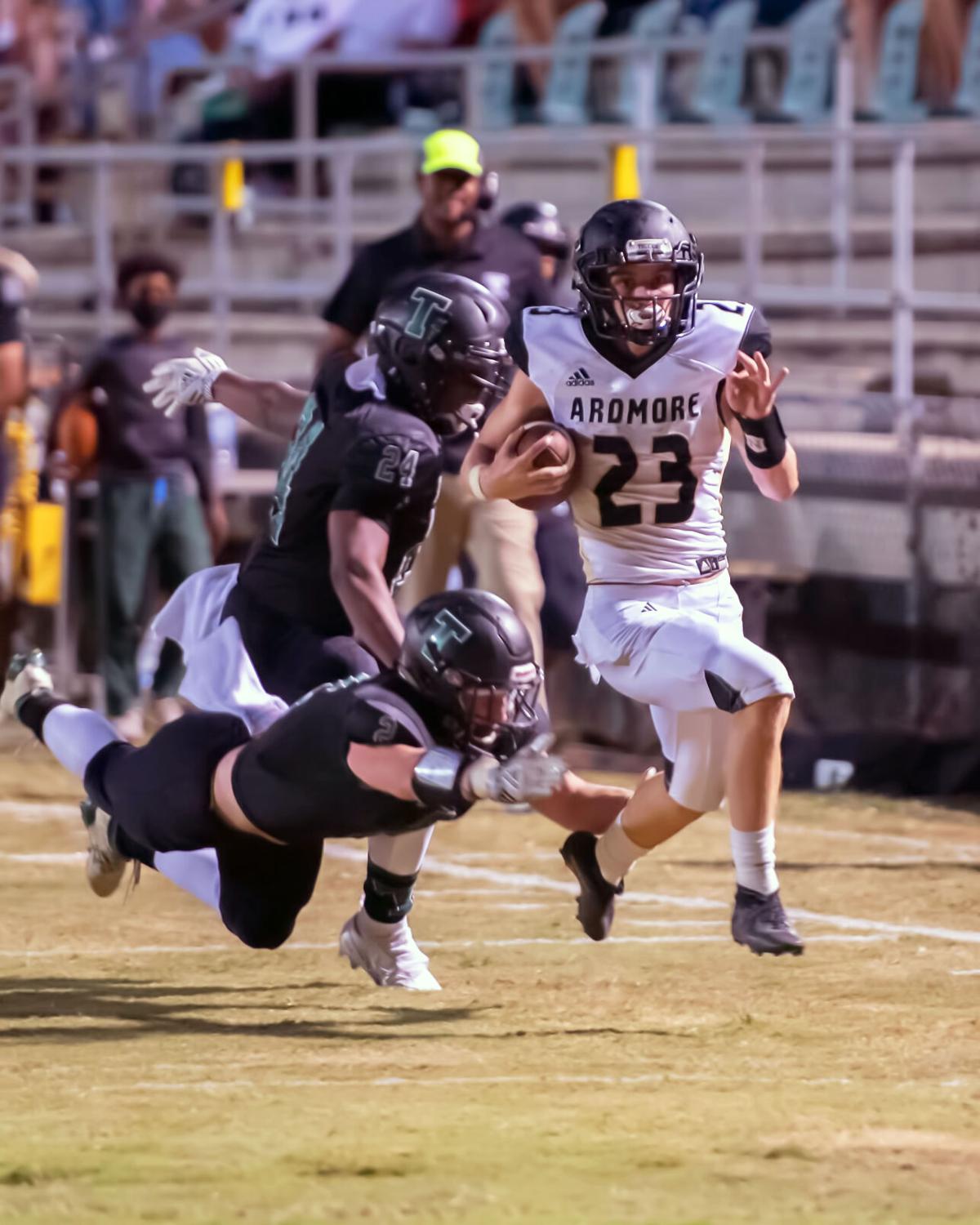 Ardmore's Conner Harbin races down the sideline as Tanner's Nick Gibson (2) and Alex Guster (24) try to tackle him. The Tigers opened the high school season in Limestone County with a 42-18 win over the Rattlers. 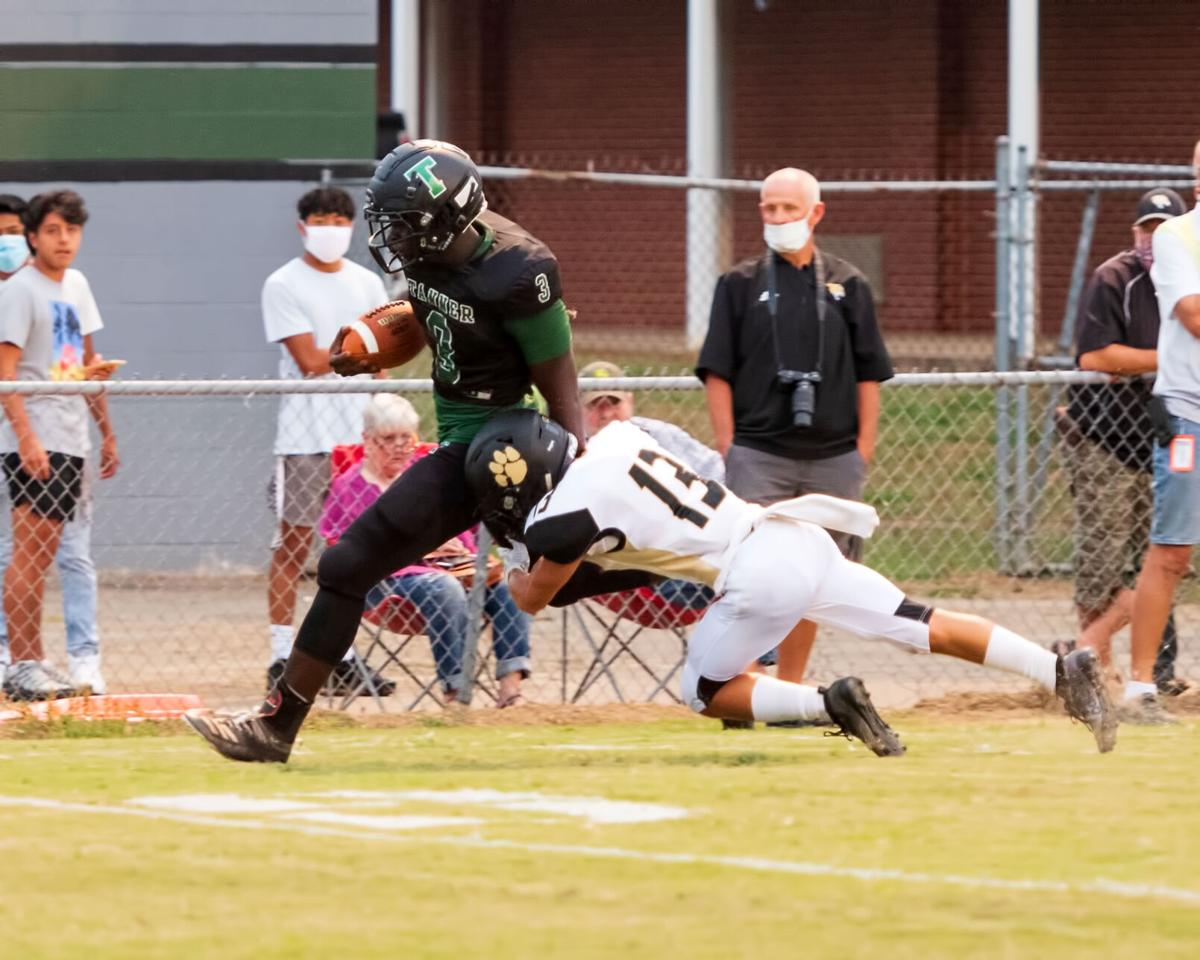 Tanner's Evan Fuqua crosses the goal line for a touchdown as Ardmore's Dylan Lanier attempts to tackle him in the first quarter of Thursday's game.

Ardmore's Conner Harbin races down the sideline as Tanner's Nick Gibson (2) and Alex Guster (24) try to tackle him. The Tigers opened the high school season in Limestone County with a 42-18 win over the Rattlers.

Tanner's Evan Fuqua crosses the goal line for a touchdown as Ardmore's Dylan Lanier attempts to tackle him in the first quarter of Thursday's game.

Ardmore coach P.J. Wright has made forcing turnovers a focal point of the Tigers' preseason preparation. It didn't take long for all that work to pay off.

Ardmore scored four defensive touchdowns to pull away from Tanner and take a 42-18 victory in Thursday night's season opener.

Ardmore had scored 13 points before its offense even took the field, as each of Tanner's first two offensive possessions ended in Tiger touchdowns.

Allen said the Ardmore defense took lots of pride in putting points on the board to help out the Tiger offense.

“We've just been working the whole entire summer, trying to get the ball on the ground so the defense can pick it up and score or just give the ball to the offense so they can do what they do,” Allen said. “We've been working hard.”

When Tanner didn't turn the ball over, the Rattlers moved the ball well in the first half. Tanner got on the board on its third possession with a 21-yard touchdown run by Evan Fuqua, and after a 29-yard field goal by Xzander Atkins put Ardmore up 16-6, Tanner cut the lead to four points on its next possession early in the second quarter.

A 39-yard run by quarterback Skylar Townsend put the Rattlers in scoring position, and after Michael Guster broke open a 17-yard run to the 1-yard line, Townsend scored on a quarterback sneak to make the score 16-12.

But just when it looked as if the Rattlers had some momentum, the turnover bug struck again. Tanner's next possession looked promising as the Rattlers drove inside the 40-yard line, but once again, disaster struck. Reyer scooped up another fumble and rumbled 62 yards for a score to give Ardmore a 23-12 lead.

Tanner came right back, however, with Guster racing 42 yards down the sideline for a touchdown late in the half to make the halftime score 23-18.

But any momentum Tanner carried into the half vanished in the second half. Ardmore's defense turned up the pressure and held Tanner to just 78 total second-half yards.

Perhaps the most important play of the game came late in the third quarter. Tanner had just been stopped on downs at the Ardmore 20-yard line, and two plays later, quarterback Owen Doss threw a screen pass to Conner Harbin. Harbin looked to be stopped for a short gain, but he broke several tackles along the sideline and raced 65 yards for a score that gave the Tigers some breathing room.

Ardmore had two more long touchdowns in the fourth quarter. Running back Thomas Colston broke loose for a 65-yard touchdown run early in the fourth, and Allen closed the scoring late in the game when he intercepted another pass and ran untouched 80 yards to put the icing on the cake.

Wright predicted Allen would be Ardmore's playmaker on defense this season, and the senior safety didn't disappoint.

“We knew Chris Allen was going to be our playmaker,” Wright said. “And in the first game, he gets two pick-sixes, and Nathan Reyer gets two scoop-and-scores. Unbelievable.”

Allen said it was the first time he ever had two interception returns for touchdowns in a game.

“It felt great,” he said. “I just saw the field, saw open places and just followed them. It felt like we were doing our job in the offense.”

Colston finished the game with 119 yards and a touchdown on 14 carries, while Doss had 97 passing yards. Guster had a fine game for Tanner in defeat. The senior rushed 20 times for 156 yards and also had a 50-yard reception.

Ardmore will host Elkmont next Friday, while Tanner will play host to Lexington.