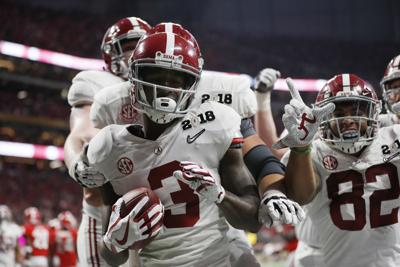 FLOWERY BRANCH, Ga. (AP) — The Atlanta Falcons have picked up receiver Calvin Ridley's fifth-year option, meaning he will make $11.1 million in 2022 and be in line for a long-term deal.

The Falcons made the expected move on Monday, the deadline for teams to announce their decision on first-round picks from the 2018 draft. The team had no announcement on the option for tight end Hayden Hurst, presumably meaning he will become a free agent after the upcoming season. Hurst was a 2018 first-round pick of the Baltimore Ravens who was traded to Atlanta before last season.

Ridley, the No. 26 overall pick of the Falcons from Alabama, is coming off his best season. He had 90 catches for 1,374 yards and nine touchdowns in 15 games, stepping into a lead role with Julio Jones enduring an injury-plagued season.

Ridley has the most receptions (217), receiving yards (3,061) and touchdown receptions (26) through the first three seasons in Falcons history.

Selected one pick ahead of Ridley, Hurst was dealt to the Falcons last year along with a fourth-round pick for second and fifth-round choices. He had his best season with 56 receptions for 571 yards and six touchdowns.

But Atlanta selected tight end Kyle Pitts with the No. 4 overall pick in this year's draft, casting doubt on Hurst's long-term role with the team. He would have made $5.4 million in 2022 if the Falcons had exercised his option, an untenable choice given the team's salary-cap woes.